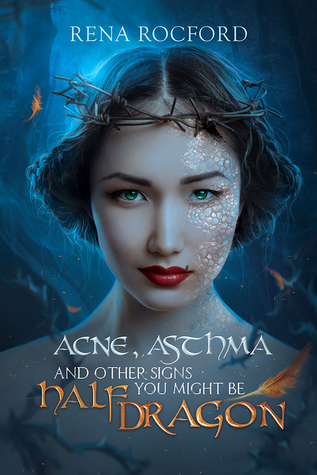 “Allyson fights acne, not trolls. As an inhaler-carrying member of the asthma society, she just wants to meet the father who turned her mother into a paranoid, move-across-the-nation freak. Now she’s trying to fit in at yet another school, but for the first time in her life, she has a best friend, Beth. When Allyson accidentally spits fire at kidnappers in the mall, she realizes why her father isn’t in the picture: she’s half dragon. Her acne? Emerging scales. Her asthma? The side effects of her dragon’s fire breath. Instead of freaking out, unflappable Beth reveals her own troll heritage and explains how things work with the supernatural creatures hiding within the modern world of smartphones and skyscrapers.

When trolls kidnap a unicorn, Beth gets blamed. Allyson is determined to prove Beth’s innocence and keep her friend off the unicorn chopping block. When they start looking for the kidnappers, they get a call from the last person they expect: Allyson’s father. He tries to warn them off, but he’s been put under a spell by the kidnappers to keep the victims from escaping. Nothing short of death can stop him. Now Allyson must choose between killing the father she’s always dreamed of, or letting her best friend die for a crime she didn’t commit.”

I was drawn in by the title and I thought the cover was absolutely gorgeous, although I still do not understand why there is a crown of what appears to be barbed wire around her head. Even so, I definitely wanted to take a chance on Acne Asthma, and Other Signs You Might Be Half Dragon. It took me about two hours to read and to describe it in two words it was ‘mellow’ and ‘adventurous.’

Sometimes in fantasy (or anything with adventure in general) books, there’s a constant urgency feeling. At least, that’s how it is for me. Even though my heart-rate might be steady and normal, my mind is tense, as if I’m wading through an ocean of suspense. And you know? That can be stressful. So I liked the mellow feeling that I got from, Acne, Asthma, and Other Signs You Might Be Half Dragon (which is hereby shortened to AAOS).

Please welcome Allyson Takata to the stage. Allyson is in high-school and extremely insecure over the acne, later learned to be scales, on her face. She hasn’t had much adventure in her life farther than evading the bullies in her school and snatching hurtling objects out of the air before they can kiss her face.
I liked Allyson. She was intelligent, courageous, and tried her best to save people who she didn’t know. Many people are insecure about acne on their faces, so I found no fault in her applying makeup. The only fault I found in her was that she was disrespectful towards her mom. Rarely has my mom been wrong about things that matter and Allyson’s blatant lack of respect towards the only parent she’s ever known, the same parent who has no doubt been trying to protect her for years (which should have been obvious to Allyson after a while), was terrible. I won’t lie and say that Allyson not having many flaws bothered me since it didn’t. Because of the pace, there wasn’t time for meticulous character development, no matter how realistic it may be. There was still character development, but it wasn’t the kind that I’m usually writing about.