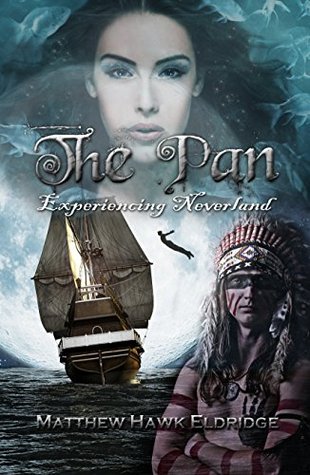 “Take a journey with one of the world’s most popular orphans, Peter Pan, as he leaves his native land, England, in search of adventure. Traveling across the Atlantic Ocean, Peter makes some new friends and villainous enemies as well. Eventually, he discovers the place where a boy should never ever be—Neverland: The land of pirates, natives, zombies, missionaries, and Wendy’s orphans, the Lost Boys.
And while Peter vows to never grow up, he can’t help but to mature into a young man, faced with the attraction of a beautiful young woman.
But Peter’s entrusted with a secret: He can stay young forever, after all. He only needs to discover the clues to finding and unlocking the Fountain of Youth, while battling the dreaded Captain Hook for the same prize.
Matthew Eldridge’s version of the Peter Pan story is a dark, humanistic, yet innocent adventure, dipped in realism with true settings and believable characters. Join Peter, Wendy, John, Michael, Tiger Lily, the Lost Boys, Captain Hook and many others as they fight their way from Neverland to the Fountain of Youth. This is not a fairy tale, but a historical action adventure following the life of the boy who refuses to grow up.

This special edition of The Pan benefits impoverished Native American children living on reservations. Many of these native children live in deplorable, third world country-like conditions.”

I won’t lie, I picked up The Pan: Experiencing Neverland because of the promise of it being dark. Don’t get me wrong, I like Peter Pan and his childish innocent ways, but I most definitely wanted to see a dark version.

I was disappointed though, although it may be just me personally, I felt that it lacked the ‘darkness’ that I was looking for. Admittedly, I had wanted to see Peter be rather…well, bad. My interpretation of dark was that he wasn’t going to be the giggling boy who wouldn’t grow up, he was going to be a boy who knew so much that he had to.

Eldridge captured the child-like part of Peter, I would have to agree. I could hear his voice as I read, sometimes I would raise my eyebrow at his thoughts (which was the most movement the book could elicit from me (besides my eyes as they read)), and his juvenile thought process was realistic. I do wish Peter had grown up though. While yes, I know that he is supposed to be the boy who never grows up, I felt that with all the situations he went through, poorly detailed and obvious fillers as they were, he should have quickly lost his innocent state of mind.