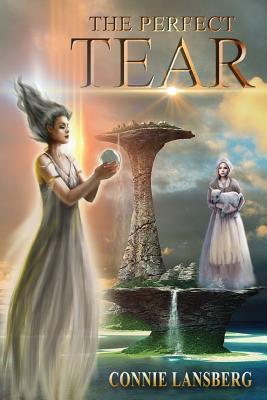 “Eleanor is a singer. Her songs keep nature in balance, but when they are stolen from her, a grey mist descends and her world fails to thrive. This timid orphan is thrust into a course of action she never asked for, nor envisioned. Set against a backdrop of abandonment, loss and betrayal, she must find her way through strange and dangerous landscapes in her desperate search for the Perfect Tear, a dark crystal which holds the future of her world. But, Eleanor is no savior. She is a simple girl with strong instincts and she must learn to trust them. Just like the notes of song must connect to create a melody, Eleanor must discover the connections needed to create the harmony required to truly save her world.”

Books like these just don’t help when you’re still reeling from some other book breaking your heart.

Lansberg has poured hand sanitizer in my paper cut and I can’t say I like that very much.

(Not the hand sanitizer, the book)

Okay, truly? I was rooting for the villain when I started reading this. I didn’t know they were the villain, but I just wanted them to succeed, it seemed like it was the right thing, the cause, you know? So imagine my surprise when they become the villain and at one point, in my notes I said,

END_OF_DOCUMENT_TOKEN_TO_BE_REPLACED

“This is the Arena, and here we live to die.” These are the words carved into a holding cell where genetically altered gladiators, the winged humans called Galdoni, are trained to fight. Kale, rescued by three high school students and nursed back from the brink of death, is given the chance to experience life as a human. When he is captured, he has to use what he learned in the world outside the Academy in order to free the other Galdoni and return to the human girl he loves.

Dark and exciting, Galdoni pushes the boundaries of love in a world of violence.”

This was my first book about angels and the concept was interesting, I was skeptical but intrigued. However, I have to say that my skepticism was justified as I read this book.

There were so many loose ends, characters introduced that are obviously just to move the plot along and then never mentioned again, and strangely calm responses to dangerous situations. The cover was so gorgeous, yet this book didn’t do it justice.

Kale is a Galdoni, a genetically modified human with wings. His sole purpose? Fight for his life in dangerous arena battles. For a reason I won’t give away (because I forgot), all of the Galdoni are released from the Arena, Kale included. He’s strolling along the street and suddenly hears a boy screaming. Long scene cut short, he saves a younger Galdoni from being beat up by humans; however, he is badly injured in the process. Fast forward a bit and he is rescued by a family who happens to have a daughter his age. Which brings me to my first issue: The insta-love. There is simply no chemistry between Brie and Kale. None. She gives him a cup of water, giggles when he drinks it all (wow! You just got beat up within a centimeter of your life! Why are you so thirsty? *giggle giggle*), cuts his hair, and suddenly: “I love you.” “I love you too.” Cue the love-struck googly eyes. I still don’t understand what they see in each other. I’m also not sure why Kale even knows what love is. He hasn’t received it his whole life.