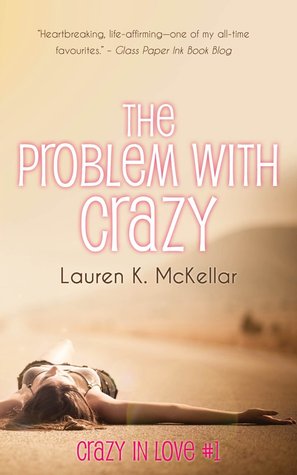 The problem with crazy is that crazy, by itself, has no context. It can be good crazy, bad crazy … or “crazy” crazy–like it was when my ex-boyfriend sung about me on the radio.” Eighteen-year-old Kate couldn’t be more excited about finishing high school and spending the summer on tour with her boyfriend’s band. Her dad showing up drunk at graduation, however, is not exactly kicking things off on the right foot–and that’s before she finds out about his mystery illness, certain to end in death. A mystery illness that she could inherit. Kate has to convince everyone around her that her father is sick, not crazy. But who will be harder to convince? Her friends? Or herself? The Problem With Crazy “is a story about love and life; about overcoming obstacles, choosing to trust, and learning how to make the choices that will change your life forever.

I wasn’t sure what to expect with The Problem with Crazy. Would it be cliche? Would I hate it? Would it turn out to be just a regular romance story where the main female character has a mere sprinkle of issues? All of these questions were fortunately answered it with a “No.”

Since life has been busy, I’ve been reading books on my iPod’s Kindle, jotting down notes for myself later, and then going back to the book when I get a chance. This keeps me from forgetting how I felt about the book and I can remember what the book was about. When I returned to this book, I still remembered it and so I gave it a 3/5 stars before reading my notes. Upon accessing my notes, I read “…I was near tears…I’m in awe…I give it a full five stars.”

The main character, Kate Tomlinson, has her life figured out. She is graduating high-school and immediately going to travel the world with her boyfriend and his band as she organizes their tour. Then, her plans fall through like an unexpected sinkhole.

There’s is many things and very few things to say about Kate. There’s no doubt that she is a strong main character. She lacked cliches and had honest character development. She responded to the sudden change of events with fear, anger, irritation, like anyone would and I respected that. But she didn’t leave it there, rather than dwelling on the situation indefinitely, she confronted the insecurities that were drawn to the surface with the help of old and new friends. The main issue I had with her was her response to an offer from someone after the final twist at the end. It was, in my opinion, a shallow response and honestly shocking after all that she had been through.