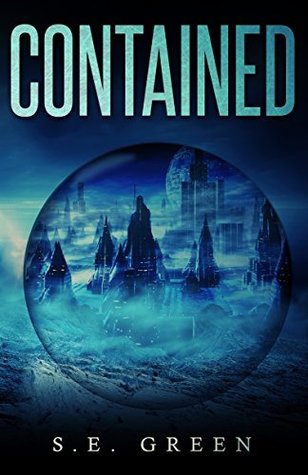 “After a viral attack from Screechers left the Earth desolate, a safe house rose from the disease ridden ground; a place where people are protected from the virus and the wrath of the creatures that delivered it to their doorstep. Life outside of the man-made walls of Containment became a distant memory.
Eighteen-year-old Reverence Arthur is thirsty to escape the Container she has spent her entire life in and bring justice to the Screechers. When she becomes the first female to join the Watch, the Containment military, enduring cat-calls while she showers is the least of her problems. The Watch has fired shots declaring war, her cold shouldered mother has become particularly arctic, and a rumor about her father, a Watch General killed in action, raises questions about the motives of the officials within Containment.
Then, amid the battle for Earth, Reverence sees a human. A living, breathing human surviving unprotected in a world where the air is toxic, and she uncovers a truth about her home that is vile enough to kick-start a war of its own.”

I was completely caught off guard because of Contained. My expectations were admittedly lowered when I saw the usual one-word title (that are on most dystopian books), the words ‘Screechers’ and ‘Watcher,’  and the heroine’s first name, Reverence. I was expecting a generic dystopia, where there’s some type of war against some type of creature that is out to kill humans and the heroine is named differently than everyone and is the only one with questions and eventually starts a rebellion. When I say, I was pleasantly surprised and impressed, I truly mean it.

I did roll my eyes at Reverence’s name, but half-way undid my eye-roll when I saw that there were other out of the ordinary names like “Force,” “Brute,” and “Apollo.” I appreciated Reverence, much more than I thought I would. She wasn’t a perfect heroine with no flaws who immediately steps up to any challenge. Instead, she was an eighteen year old girl who had many questions, a rebellious streak, but a rather good head on her shoulder. She was a leader, an actual one. Her leadership abilities weren’t something she was conveniently blessed with and everyone wanted to follow her like mindless zombies. Reverence earned respect and her role as a leader. She didn’t cry when things got hard, she understood that she had to have a cool and calm exterior, even if she was falling apart inside. I recall her crying maybe four times, twice it was somewhat detailed and once it was merely mentioned. I said four because I like even numbers. Reverence preserved, didn’t allow hormones or ridiculous love triangles get in her way of being the heroine she is, and made great decisions under pressure. She had obvious room for improvement, but it made her realistic.