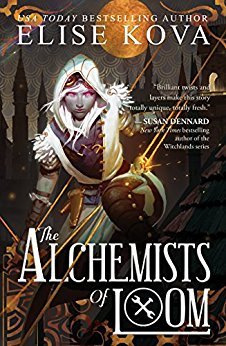 “Her vengeance. His vision.

Ari lost everything she once loved when the Five Guilds’ resistance fell to the Dragon King. Now, she uses her unparalleled gift for clockwork machinery in tandem with notoriously unscrupulous morals to contribute to a thriving underground organ market. There isn’t a place on Loom that is secure from the engineer turned thief, and her magical talents are sold to the highest bidder as long as the job defies their Dragon oppressors.

Cvareh would do anything to see his sister usurp the Dragon King and sit on the throne. His family’s house has endured the shame of being the lowest rung in the Dragons’ society for far too long. The Alchemist Guild, down on Loom, may just hold the key to putting his kin in power, if Cvareh can get to them before the Dragon King’s assassins.

He offers her the one thing Ari can’t refuse: A wish of her greatest desire, if she brings him to the Alchemists of Loom.”

Oh, my gosh. Hello? Is this thing on? It needs to be on. You need to hear (read) this!! I LOVED The Alchemists of Loom. I wasn’t sure that I would! I didn’t know what was going to happen, but I loved it.

I LLLLLLLLOOOOOOOVVVVVEEEEEDDDD the characters. (character spoiler) Florence, Arianna, Cvareh, all of them! Not a single cardboard character present.

(character spoiler) I liked Florence’s gentle and curious, but determined nature. She isn’t my favorite character by far and I didn’t really care to read the book from her point of view, but I was still interested.

Arianna was one of my favorites. Her daring, aggressive, and sarcastic nature was what I could really relate to. Do I go around doing even 1/3rd of the adventurous things Arianna does? Definitely not, but I loved reading from her point of view. The way she thinks and handles problems and even her emotional barriers was something fascinating.

Cvareh was my favorite as well, but if I had to choose between him and Arianna, he’s my second. I love him. He isn’t quite a book boyfriend, but I wouldn’t hesitate to befriend him. His noble, honorable, prideful (but somehow humble!), caring, and adventurous nature made me grow to love him. At first, I was wary and skeptical, but he quickly grew on me. I really enjoyed seeing him develop to the new surroundings and people, both towards Loom as well as (spoiler) Florence and Arianna.

The plot was impeccable. I didn’t see a single hole whatsoever and I was immensely pleased. I only saw about two mistakes, but they were harmless since I was too drawn into the book. Kova’s writing is smooth, captivating, and gorgeous. The descriptions were simply amazing both for the different environments, the different emotions of each character, and the fight scenes. I must praise Kova for choosing to switch point of views between characters and keeping everything in omniscient third person. It really fleshed out the characters and helped me to understand them more, while not getting distracted by figuring out which “I” is which character.

Would I Recommend The Alchemists of Loom? Overall, I am extremely impressed and delighted to have read this book and I think others will be too, so I would recommend it. It’s a hypocritical statement, because (when I was writing this review) I had just got finished ranting to Maggie about how a an ebook shouldn’t be more than 2 dollars maximum, but this book, in my opinion is worth the $3.82.

I received this book for free from the author via Xpresso Book Tours in exchange for an honest review.

16 thoughts on “Review | Dragons and Grudges”