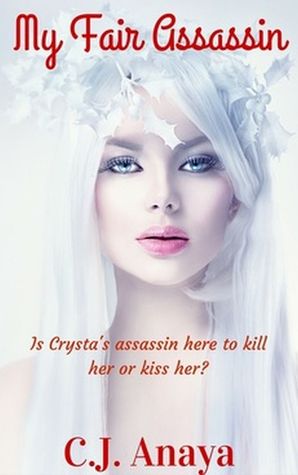 “It’s not everyday a teenage girl is singled out for assassination.

Crysta has come to accept the fact that she is freakishly different. Her shocking white hair, creepy powers, and weird eating habits have prevented her from fitting in with her various foster families. Now that she is fully emancipated and providing for herself, she hopes that life will settle down and become something halfway normal.

Her hopes are shattered when a dangerous man with lethal intent breaks into her apartment, but this enticing stranger isn’t what he seems. Is he here to kill her or protect her from others who will?

My Fair Assassin is a romantic short story with elements of paranormal and urban fantasy woven in for an entertaining read. It also touches on social issues involving personal self-esteem and acceptance. Adults and teens alike will enjoy getting lost in the pages of Crysta’s story as she finally comes to accept who she is…or rather what she is.”

Oh dear. If assassins are anything like the assassins in My Fair Assassin, I would very much like to be singled out for an assassination.

I love love love Crysta. She is hilarious and she tries so hard to do her best and she is just perfect. She has her flaws and sometimes she tries to ignore what’s right in front of her face, but she’s perfect. I loved her. You need to read this line:

The well muscled warrior standing several feet in front of me had made that abundantly clear [that she wouldn’t live long]. I studied him intently, deciding it would be best to memorize every inch of him in case I managed to escape and succeeded in describing my would be assassin to the local authorities.

My need to drink in his image had absolutely nothing to do with his six-foot frame, broad shoulders, sharp, chiseled features, and flawless crystal-blue orbs framed by a sturdy brow.

Doesn’t description make you want to just squeal? It made me want to squeal.

I loved reading Crysta’s thoughts and her reactions. I also really enjoyed watching her develop. (Okay, I give up, forgive me, I’m just going to keep using “love”) I loved beginning to know her as I learned about how she grew up and the struggles she faced.  I loved seeing the outcome of her past, but also the possibility of her future. I admired the way she made decisions, kept a level head even when under stress, and just her as a person overall. She was realistic. Crysta was such a beautiful person that I forgot she was a character.

I loved (there’s love again, oh dear) the other characters too. They were well-developed and had depth. The love interest was awesome. He was hilarious and also clueless about so many things that Crysta was saying. And you know what made me love him so much I felt angry? (Don’t ask me how that works) He respected Crysta. I mean, he hardcore super ultra mega extra respected Crysta. At first, he did something without her permission and sincerely apologized. But afterwards he respected her boundaries and what she wanted and even the way she lived her life, even if it was different from the way he lived his. It was awesome. One of the best love interests I have ever read about.

There was insta-love between Crysta and the love interest. Not insta-insta-love, but it was still insta-love. It still had meaning though and so I’m not going to complain. The love wasn’t lust with the wrong label or based off how cute they thought each other was. It was at first just regular “Oh hey you’re cute and I like you” and then sacrifice was added in and experience (as in, they experienced events together) that made it more than just physical attraction.

Speaking of sacrifice, I admire Anaya for including sacrifice. I truly do. I was shocked and amazed and my mind was blown when two major sacrifices were made and Crysta wasn’t the only one making them. So many times the heroine is making all of these sacrifices and the love interest is like “Oh great! Thanks.” It wasn’t so in My Fair Assassin.

I didn’t really know what to expect, since I’ve never read anything by Anaya, but I’m so pleased that I did. My Fair Assassin is only 32 pages long. Who cares? There are tons of books that short, some of even shorter! You should care because Anaya somehow put in self-sacrifice, multiple character development, vivid description, romance, fantasy, conflict, and character backstory in 32 pages and managed to not cram it in. That’s amazing. Usually I can’t stand it when the heroine is moon-eyed at the main male character, but Anaya did it so well that I was moon-eyed as well. There was also insta-love, as I mentioned, but I didn’t really mind. I acknowledged it in my notes and in my mind, but it didn’t irk my soul. Anaya has, it seems, mastered a rare form of insta-love: one that makes sense.

Would I Recommend My Fair Assassin? Yes!! I haven’t written a book review in SO LONG, because of my new schedule,it’s driving me crazy. But I’m so glad that this is one of the first ones (of many more to come!) that kind of jump-started me back into it. It was completely enjoyable, it doesn’t take too long to read, but it’s still completely full of everything you could ever ask for. If you read it, tell me how you like it!

4 thoughts on “My Fair Assassin by C.J. Anaya”