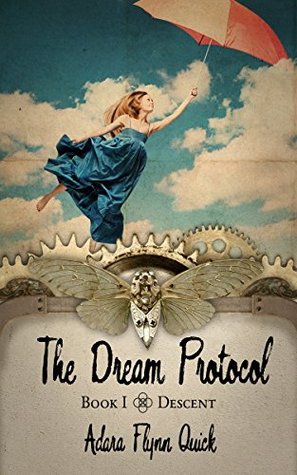 “WHATEVER YOU DO, DON’T GET OLD.

In fiery young Deirdre Callaghan’s home of Skellig City, no one has dreamt their own dream in over a thousand years. Dreams are produced by the Dream Makers and sold by the Ministry, the tyrannical rulers of the city. In Skellig City, years of life are awarded equally and the ruined are cast away beneath the city on their 35th birthday.

Unbeknownst to the Ministry, Deirdre’s handsome friend Flynn Brennan is afflicted with a terrible disease – a disease that accelerates the aging process. Knowing his fate if the Ministry should ever discover his illness, Flynn has lived his whole life hiding from their watchful eyes. When Flynn’s secret is finally discovered, Deirdre is determined to free him from the Ministry’s grasp. But to save him, she will have to reveal herself to a shadowy enemy…one that none of them even knew existed.”

Truthfully, I am not impressed. Also truthfully, I am not disappointed. It’s like waiting for a pie to finish baking and it smells really amazing and you take it out of the oven and you cut a slice and the crust is crisp. Then you bite into it, and you think Hm. Smells better than it tastes, but it’s still pretty good.

The concept is truly spectacular, let me be clear. A society where being old is the equivalent of being ruined and therefore, at thirty-five, you are cast away into Tìr na nÓg, what I can only assume is Heaven. Quick had a great synopsis, which is why I read the book in the first place, and I don’t have any “harsh” complaints. The reason for my rating is because I wasn’t as engrossed as I [wish I] could have been.

I liked the characters, at least, I think I did. Obviously, I knew who Deirdre, Flynn, and the others were. But, at the same time, there wasn’t much development or, in my opinion, overall insight as to who they were. I felt rather disconnected from them and I found it quite hard to relate, even though I was still interested in their lives.

Deirdre wasn’t so bad. I liked that she wasn’t the usual reckless heroine, but instead a lot more realistic. She didn’t hold up three fingers in the middle of a Ritual Descent or shout Down with the Ministry!! in their version of a public square. Instead, she kept her thoughts to herself, her friends, and her family. I think her sharing her thoughts with her family was really realistic, because for the most part it was snarky comments about the Ministry that openly showed her disapproval.

It’s terrible, but I didn’t really care for Flynn. Every now and then he would say something really sweet that would make me like “Aw!! That almost made me like you.”, but the moment would pass and I would be back to not truly caring. Flynn wasn’t a bad character, that wasn’t the reason. He did punch a mirror (I think it was a mirror) when he was frustrated, which somewhat alarmed me, but he wasn’t a bad kid. I wish I could have been more interested in his journey than I was.

I think the main problem I had with the book is that it felt like there wasn’t enough. But, at the same time, it was enough.

When it comes to the book not being enough, it gets complicated. On one hand, I hate it when books are dragged out as if they’re a piece of taffy (they aren’t!!) and it just never seems to end because of all the things that are thrown in. On the other hand, I need a book to have enough in it so that I don’t feel like I missed out even though I read every word. There’s a sweet spot in the middle, but it’s hard to find.

The Dream Protocol excluded a lot of stuff, in my opinion. I wanted to know a bit more about the dreams, the little snippets of “Voice 1 & 2” conversations, why thirty-five is considered the age that you’re too old, and a bunch more ‘why’s’ or ‘who’s’ or ‘what’s’ that I can’t mention because spoilers. I needed more. I also wanted a bit more world building. When Quick describes a certain dream that Deirdre has, the description was amazing. I could see it in my mind detail by detail and I was impressed. But the rest of the time, when she isn’t in the dream, I feel like I was told what Deirdre’s world was like, as if I had already been there. I am all for imagining my own take on the worlds that authors weave, but I still need some form of structure. Even though I can clearly recall the photo my mind made of the dream world, all I can remember from Deirdre’s world is a white wall with cardboard boxes in front of it and red eyes. What can I do with that?

I considered the book to be enough because by the time I reached the end, I didn’t think What? That’s it? This can’t even be classified as a complete book! There was enough written that I didn’t feel cheated and I wasn’t pressured to read the next book. It was up to me as the reader as to what I wanted to do, and I kinda liked that.

Would You Recommend The Dream Protocol? Um. If I had bought a copy of the book and I was done and a friend of mine was like, “What’s that? Was it any good?” I would tell them a brief explanation of my thoughts and offer it to them to read. Even though my mind wasn’t blown, maybe theirs would be.

2 thoughts on “The Dream Protocol by Adara Flynn Quick”