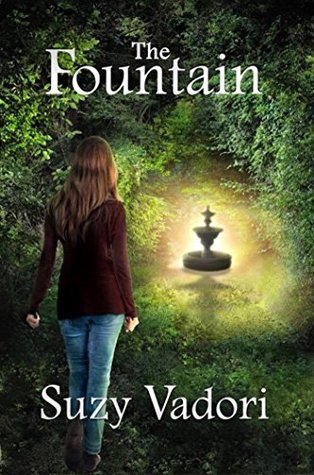 “Careful what you wish for. It just might come true.
Ava Marshall, driven by a desire to learn more about her mother’s past, moved across the country to attend St. Augustus. But her mom’s secrets will have to wait, because she finds herself instantly hated for her family’s connection to her new school and is forced to fight alone against a classmate who is setting Ava up to be expelled.

Fleeing campus, she takes a shortcut to her Gran’s house through the forbidden West Woods and discovers a mysterious fountain that has the power to grant a wish and change it all. But can she live with the consequences? Or will she end up breaking every school rule and risking the love of her life to make it right…”

Can anyone tell me? Anyone? What did I just read? Because I have no clue. I just read a terrifying mess and Oh. My. Gosh, run for your lives.

Surprisingly, I don’t hate the characters. There’s definitely no love for them either, but there’s no hatred. Even still, I can’t stand them.

Can we start with Ethan? We’re gonna start with Ethan. He wasn’t the stereotypical hyper-masculine, brooding, mysterious, borderline I’ll-be-abusive-in-a-week male character, but he was somehow even more unsettling. At least, with the aforementioned stereotyped male, the red flags are glaringly obvious. But with Ethan, they were subtle. He quietly manipulated Ava into thinking he was some kind of hero as he convinced her to not do the one thing this entire book is (supposed to be) about. (And no, it isn’t making a wish.) Not to mention the fact that he, (spoiler) got drunk, came to homecoming, and kissed Ava as he looked her boyfriend IN THE EYE. Is that the kind of love interest people want? And, not to mention, but definitely to mention, the fact that he wished for Ava using the fountain. That’s creepy. I wouldn’t want to be “wished for.” Who wants to fall in love with someone against their will? Who wants someone to fall in love with them against their will? Low life creeps who think they’re “nice guys,” that’s who. Go tip your hat somewhere else, m’lady. (end spoiler) He wasn’t interesting or a “true friend” or anything of the sort. I don’t like him.

Ava, you need to go home and re-evaluate your life. If you honestly are so shallow, inconsiderate, and weak, that you can’t make the one decision that you’ve been moaning about the entire book that will hopefully right all the wrongs you committed, just because a guy’s smile makes you “warm to the core,” then you disgust me. Also, you know what I hate? Cheating. I hate cheating in all forms of the word, especially cheating on your significant other. So you can imagine how much I hated a book that not only has Ava cheat on her boyfriend, but practically promotes it. Don’t believe me? Read this excerpt from the end of the book:

““I don’t know what will happen with [boyfriend] and me,” Ava answered honestly, though feeling surer of herself than she had in a while. “But I do know that when you and I have been apart these past weeks, I missed feeling as alive as I do when I’m with you.””

And no, she isn’t saying that to her current boyfriend. She willingly kissed this other guy three times, not a single thought of her actual boyfriend in mind. There’s no guilt in mind, no regret, none of that. Just a brief thought about how she “loves” her boyfriend, then it’s back to cheating. Great role model, Ava is.

Was there a plot? I must have missed it. It goes from talking about the fountain, which the book is named after, to focusing on Ava’s adventures in cheating. I don’t care to read about cheating. Who cares? Especially if the cheater reaps no consequences. I was incredibly bored, 60% in, there was still no real meaningful mention of the fountain, besides vague talk about Ava doing research, which was just filler information. A disappointing plot that somehow disappeared faster than the fountain did, but still never returned.
Would I Recommend The Fountain? No. This book was awful. If I had a hard copy of it, I would let my dog have diarrhea on it.

I received this book for free from the publisher via NetGalley in exchange for an honest review.

2 thoughts on “The Fountain by Suzy Vadori”