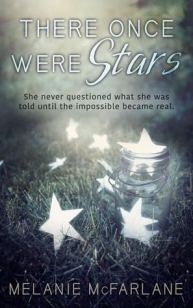 “Peace. Love. Order. Dome. That’s the motto that the Order has given the residents of Dome 1618 to live by. Natalia Greyes is a resident of Dome 1618, a covered city protected from the deadly radiation that has poisoned the world outside for four generations. Nat never questioned the Order, until one day she sees a stranger on the outside of the dome. Now Nat wants answers. Is there life outside the dome and if so, what has the Order been hiding from everyone?”

McFarlane, please forward my apologies to your co-worker, Ms. Kahla Dombowsky, for I am stealing her quote: This is so good!

There Once Were Stars was predictable, but unpredictable, and that’s not only possible, but also enjoyable.

Here’s what was predictable: Government of some sort is bad, inevitable love triangle, female main character with brown eyes and brown hair, lies, lies, and more lies, the main character getting upset when everything she knows is a lie, a smirking love interest, an I’ve known you my whole life and you’re sweet and comfortable love interest.

Natalia had me screaming. I can’t even begin to tell you how many times my notes were (entirely) or at least included “YES!!!!” (number of exclamation points may vary). She was all the right things. Now, yes, she did have brown hair and brown eyes, which is cliche, but to be fair, it’s common in reality, so I get it. But guess what!!!!!! SHE NEVER MENTIONS HOW MUCH SHE HATES THE COLOR. OR HOW HER HAIR IS A MOUSY BROWN. OR HOW PLAIN HER BROWN EYES ARE. SHE DOESN’T. I need to say that again. SHE. NEVER. COMPLAINS. ABOUT. HER. HAIR. AND. EYE. COLOR. I was SCREAMING.

This may seem like a really insignificant fact about Natalia. Maybe it is. Well, it’s NOT. For once, the main female character isn’t complaining about her beauty or how plain she looks, she is comfortable with the body she has. And that’s so important. So very.

Next. Natalia is a normal human being. When she finds out that she’s been lied to, or information has been withheld from her, she doesn’t start screaming and “slam my fist into his chest while he just holds me as I yell at him.” NOPE. She’s like Okay, I wish you had TOLD me this beforehand, but since you DIDN’T I’m going to sit/stand RIGHT HERE and process what I just learned quietly. She does this so often that the love interest is literally like “YOU’RE ALWAYS PROCESSING INFORMATION.” and she basically gives him the side-eye and she’s like “WELL DUH. No one ever tells me anything!” I loved it. Natalia, you were perfect. Well, kinda. I didn’t see many flaws, but it didn’t matter because you weren’t really given the chance to show them. So, technically, you were perfect. And I have to stop before this paragraph becomes too long, but let me just mention this. Natalia was happy with her life in the dome. Not Whoo this place is awesome!! Happy, but she wasn’t miserable either, from what I read. What she learned about the dome is what changed her perspective, which I count as character development. Natalia met the new information with disbelief, which is understandable, until evidence and/ strong proof was provided. Awesome.

I won’t name the other characters since their names aren’t mentioned in the synopsis, but I liked them too. McFarlane doesn’t really provide a backstory to any of them, but it wasn’t truly necessary and you don’t miss out on anything because of it. She still creates a world with characters that were obviously given specific attention in order to make them real.

And now the plot and a thin analysis of McFarlane’s writing. The plot wasn’t anything out of the ordinary. It follows the basic dystopian plot like all other Young Adult dystopian novels, which is fine. I’m not condemning it, because all genres have some sort of foundation that almost every book in that genre follows. What is important, is how you make the foundation follow your idea of a book, which McFarlane did. There is romance, obviously, and even a love triangle, but for once, the heroine already knows who she wants. Natalia doesn’t string the other boy along, moaning about who she will choose or how she doesn’t want to break any hearts. Instead, she chooses. Just like that. There was some brief hesitation, but nothing that wasn’t natural. I respect that. The love interest she doesn’t choose concerned me with some of his actions, they were red flags for me, but it wasn’t as bad as some other books.

I simply must mention this too. McFarlane doesn’t have Natalia be the major key to everything. She doesn’t write Natalia to suddenly wake up one day and start disrespecting authority in the name of being defiant, or have her start a rebellion, or have characters stroke her ego by telling her We need you. You are the missing piece to our cause. Instead, people are like, Are you sure we even want her, much less need her? which cracked me up. Natalia played her role, which was important, but not the most important role of them all!
Would I Recommend There Once Were Stars? Yeah! I liked reading it and it’s a quick read. There are a lot of things I enjoyed about There Once Were Stars that I didn’t mention for the sake of my review not being too long. Nonetheless, I would recommend There Once Were Stars, it isn’t the regular cliche ridden review that plagues the dystopian genre and it’s pretty enjoyable.

Add This Book to Goodreads

GIVEAWAY! –> There Once Were Stars Giveaway <– 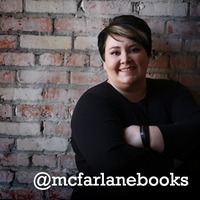 Melanie McFarlane is a passionate writer of other-wordly adventures, a little excitable, and a little quirky. Whether it’s uncovering the corruption of the future, or traveling to other worlds to save the universe, she jumps in with both hands on her keyboard. Though she can be found obsessing over zombies and orcs from time to time, Melanie focuses her powers on writing young adult stories to keep the rest of the world up reading all night. She lives with her husband and two daughters in the Land of Living Skies.

13 thoughts on “There Once Were Stars by Melanie McFarlane: Book Blitz & Giveaway!”