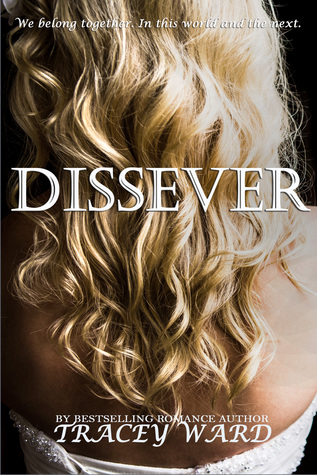 “Annabel Lee has her life mapped out for her. A pawn in her aristocratic father’s game, she goes where’s told and does as he says. And she’ll marry who she’s told to marry.

Roarke is an outsider. A member of a mysterious clan living at the edge of the distant wood, he would do anything for Anna. For the childhood friend he can know only in secret. For the girl he’s loved all his life.

As they grow older and Anna’s fate draws near, they’ll discover that nothing is as it seems. That the secrets and lies that have kept them apart are what will ultimately draw them together.

And even death itself can’t tear them apart.

Truthfully, I didn’t know what to expect when I clicked onto Dissever. The cover wasn’t impressive, it just looked like some girl who would of course be relevant in the story. I had bought the book who knows how many months ago, but I didn’t re-read the synopsis so I was going in blind. I was surprised to have enjoyed it.

Ward did something extremely unique with Dissever, something I wasn’t expecting and I adored. There are no petty enemies. This is important because she had two chances to make Anna have petty enemies and she passed them up. There’s a girl who is in love with the prince, but of course, Anna is set to marry him. Ward could have made Anna and the girl be sworn enemies because of it, but instead they become friends. The second person who could have been an enemy I cannot say, because it would be a major spoiler, but I was extremely pleased that he wasn’t an enemy.

Anna was cool. She isn’t exactly special, but she’s not ordinary either. I liked the way she acts around other people, gentle, curious, and genuine. I appreciated that despite her upbringing, she maintained a kind heart and a personality that draws people in. It isn’t easy to do that, considering her family life and the situations her father has put her in, but I was glad to see it didn’t make her callous and blood-thirsty.

I loved Roarke. He captured my heart and I didn’t even mind. He didn’t have much “book-time,” but it didn’t matter. Ward somehow made the quote “Absence makes the heart grow fonder” work in her book, which is no easy feat, so that even I was in love with Roarke, despite not really knowing him.

The other characters, who I cannot name, were amazing too. I didn’t hate a single one of them, not a single one. I wish I could read a story about the Prince and who he is, I think I would like that.

Edgar Allen Poe is one of my favorite poets, so I was squealing when I read the first excerpt from his poem Annabel Lee. Loved it! Ward included humor too, whether it was in the banter or in the thoughts of the characters. Speaking of thoughts, Ward did an excellent job in not only giving me a full backstory without info-dumping me, but in also switching point-of-views smoothly. I was impressed, especially considering she didn’t put “Annabel” or “Name” at the top of the chapter where the point-of-view changes. I didn’t realize until now that putting the name of the character we’re reading through yanks me out of the story, but now I do and I like the way Ward did it. I did see about three grammar mistakes, but I was too engrossed in the story to do anymore than highlight it and keep moving.

The plot was gorgeous. This plot was obviously not one created overnight (if it was, that is miraculous) because it was so intricate and woven in such marvelous ways that I was just in constant awe. I just adored the way things happened.
Would I Recommend Dissever? Yes, yes I would! It is worth your time and energy and maybe even a few of your tears. I don’t think I can say anymore. If I were to put it simply, this book was a journey you will want to experience.

3 thoughts on “Dissever by Tracey Ward”