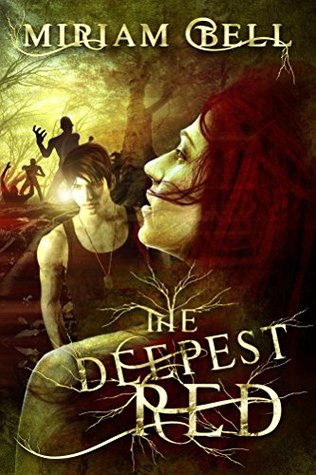 “In a destroyed world of abandoned towns and haunted memories, Millie Daniels lives protected behind the constrictive fences of a long forgotten prison. Her entire life she has longed for two things, to discover the truth behind her mother’s death and to understand the mysteries kept shrouded among the surrounding forest. However, she can not do either alone.

Faced with tragic circumstances in the decaying lands of the red zone, Millie must learn to fight for her survival. Along the way, her reality intertwines with cryptic dreams and dangerous obstacles threatening her life and those she loves. Only a skillful outsider, Connor, born deep within the red zone can help her unlock the buried truth and teach her how to stay alive against the oncoming threats.”

What is a NECESSITY to survive?

Do I have your attention now? Good.

The Deepest Red was awful. I’m talking if I was grading a book on how awful it was, it would get a A++.

First of all, I can’t stand Millie. What was her problem? She was always panicking about something, the word panic was used 19 times to describe how she felt. Millie was always snapping with anger, and it would somehow give her the ability to do the near impossible. If you’re thinking, Paige, adrenaline is an amazing thing! Yes, that is true, but any time it was convenient, suddenly Millie was super angry about something and she’d become some “amazing” whirlwind of power. I call bull. Her bedside manner was atrocious too. Whenever someone died, Millie would go up to another person and just go “Name is dead.” No words to soften the blow, no sympathetic smiles, literally just “Yeah. Your loved one is gone lol.” She even says it to one guy just so that he’ll do a task faster. How rude!

Millie is a huge jerk from every angle. One of the characters she just met, confides in her something really painful. Instead of thinking, I need to comfort this poor girl, she’s been through so much. Plus, she and the other person have put up with my mourning. Millie instead thinks, “I don’t really want to hear about the sadness of her life but my instinct to protect pulses and I find myself wanting to confide in her as well.” OKAY. I tried, guys. But I have to rant about this too. First of all, like I said, that was selfish and rude. Secondly, the word protect (variations included) is used fifty-one times, usually in some form of “what I can only see/feel is the need to protect [in his/her eyes].” or something like that. Thirdly, Millie takes the character’s sorrow, shoves it into a box, and starts talking about her own problems. The last part of the sentence? Where she’s like “oh I feel like protecting you…and confiding in you.”? Yeah, she launches into her own sob story and the other character is forced to comfort Millie. Nice going.There’s one other thing that she does, but it ties in with the plot, so I’ll save it for later.

The rest of the characters will pretty bad too. Not quite cardboard, but I can’t say I was interested in any of them. I wasn’t sad if they got hurt or died either.

The plot. Was that supposed to be interesting? Plot twists that are super predictable. I predicted who the traitor was as soon as I was introduced to them. I predicted who the love interest was going to be (more on this later). It was horrible. The only thing that didn’t happen was that Millie didn’t become the teenaged leader (yet).

FINALLY. We have to talk about the love interest. At one point, he says “I can differentiate the different between lust and love.” NO. You CANNOT. There was NO love between Millie and her love interest. He should have been called the LUST INTEREST because that’s all that there was. I was SO SURE that I would stumble upon an explicit sex scene at some point. Even in the last 10%, I was just waiting for some horrific scene to show up. Millie and the love interest meet and all of a sudden, there is so much heat pooling in Millie’s stomach, you would’ve thought she had a strange form of heartburn. It was disgusting. You know how I started this review? The whole pop quiz? Yeah, this is why I started it that way. At every turn, Millie and her almost-but-not-really boyfriend are trying to bump uglies but always get interrupted. There were awkward and uncomfortable phrases like, “‘Don’t walk out on me this time,’ I beg, almost strangled with lust.”  No??? No thank you??? This is an APOCALYPSE PEOPLE. I get it, just because you’re in mortal danger doesn’t mean you still have hormones, but you still have PRIORITIES. There are ACTUALLY BEINGS OUT THERE THAT WANT TO STRANGLE YOU, but NO, you are more fascinated by the love interest’s “narrow hips.” FINE.

And what is WITH this fetish for men growling? Who heard a dog growl and thought man, if a man growled at me I would just LOSE IT FOR HIM. I have never heard a man growl and it’s weird to read about it. The love interest kept growling as if it was some sexy trait, but it’s not! It’s weird and uncomfortable and unnatural, even described as “animalistic”!

And I have to mention that the love interest is a huge cliché. A walking “I’m not a good person and I can’t love you…but I DO LOVE YOU. Also, I’m super possessive of you and WOW do you give me a MAJOR LUST ISSUE” complex. There are so many ways to show that your male character is jealous, but having him clench his fists or threaten violence (to you or others) or “claim” you as “his” isn’t the way. In real life, that’s inappropriate and hints at abuse.

I was displeased with the writing too. There was no conceivable reason as to why this had to be almost FIVE HUNDRED PAGES LONG. There was NONE. The whole reason why it is so long is because there are SO MANY over-elaborate phrases that don’t add anything to the story. Example: “Wind unleashes my hair allowing the red strands to whip into the air as if to guard me from harm.” or “I’m so much heavier as if the new knowledge obtained from this place has latched on to me, dragging me down into the darkness hidden behind crumbling buildings. Am I to become broken and forgotten like this desolate landscape? I continue to walk.” Please. Spare me. I get it. Sometimes teenagers are over dramatic, but rarely are our thoughts as over-done like that. Then there were the constant mentioning of the love interest’s “deadly grace.” I got it the first THIRTY MILLION TIMES. He’s graceful when he fights. That’s nice.

One particular quote (aside from all the almost-sex quotes) that bothered me, was this one about suicide: “If you were a weak person you would’ve took [taken] your own life a while ago. It’s easy to let depression consume you–to give yourself over to regret and suffering. A weak person follows a path with least resistance. You’re not that person.”

This is such a hurtful and disrespectful quote and it’s inexcusable. Depression is hard. It’s more than just being sad because you accidentally stepped on your cat’s paw, or because you lost a championship. It’s way deeper than that. Suicide is NOT easy. What point of hopelessness do you think a person has to reach before they would rather kill themselves than keep going? Almost every method of suicide is uncomfortable and/or painful, but that’s considered easy? Yes, it puts an end to your problems pretty quickly, so it can be seen as the easy way out, but that doesn’t make it an easy choice. Furthermore, I don’t condone suicide, it’s a terrible thing and it’s awful that a person would feel like taking their life is the only option. However, this quote is disrespectful to those who have lost loved ones to suicide, have nearly lost themselves to suicide, and really anyone who has been affected by the suicide in any way, shape, or form.

There were many spelling errors, incorrect words used like “rather” instead of “whether,” poor grammar, a scary lack of commas, and other things that a simple proofread would have taken care of.
Would you Recommend The Deepest Red? No.