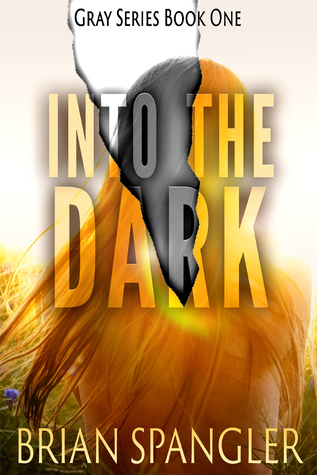 Emily wakes to find that her world has plummeted into darkness–the clouds have spilled out of the sky and taken the sun.
And there is more to the mist than just the dangers of being blind–the fog is poison, killing everything in its path. Their home is no match for the caustic fog, and her family is suddenly running for their lives.
But when she learns that the machines built to save the world could be the cause of the accident, Emily turns to her father–the original architect–with the hope that they can stop the environmental catastrophe. ”

Meh. I don’t know how I feel about Into the Dark. This is book 3 of my #MakeMeRead It Readathon (even though it’s only supposed to be for a week). I made very few notes because it was just that kind of book. I can already feel in my reader bones that this review is going to be short, but let’s get started.

Emily Stark is our main character, our female protagonist. Now, notice that I did not say heroine, because truly, there is no “hero(ine)” in this book. I kind of liked Emily, but I wasn’t rooting for her either. I appreciated that Spangler made sure that survival was the first thing on her mind. When she sees the love interest, she questions if she’s allowed to feel infatuation, if it’s wrong given the circumstances. I liked that, because that’s realistic. I feel as if I don’t really know Emily. Sure, we’re in the middle of an apocalypse, so she wouldn’t be thinking about things that don’t really matter anymore, so it’s understandable. Even still, though she isn’t a cardboard character, I don’t really know her.

The rest of the characters were kind of cliche, but not in a bad way. There was the guy who is in charge, the conspiracy theorists who take things too far, the people who get banished because of their actions, the one woman who’s old but gets the job done…all the regular apocalypse roles. Nonetheless, I liked them and I thought they were realistic and I appreciated their literary presence.

There was romance, but it’s amazingly subtle. Sure, Emily and the guy kiss like maybe three times, and I did cringe when I read the word ‘moan,’ but there was nothing graphic or explicit and it was appropriate given what was happening. I thought the epilogue was a nice touch considering it let us know what happened in the later years and we got to see Emily and the love interest’s future.

The plot was…a plot I guess? There was definitely a direction, but at the same time I’m not sure if there was a goal. That isn’t meant to be a bad thing, that is just an observation. Spangler didn’t write a “quick fix” solution, even though it seemed like there was going to be one and I really enjoyed that. I also liked reading the glimpse of what happens to Phil (which shouldn’t be a spoiler) in the epilogue. Spangler has a great skill when it comes to writing descriptions for the different scenes, which was excellent for this kind of book. I liked the dialogue he had as well.
Would I Recommend Into the Dark? Honestly? Not for $4.99. I just think that that’s a lot of money for an ebook in general. The book is pretty graphic so if you don’t like dead bodies, death in general, extreme violence, and fear, this isn’t for you. There’s nothing wrong with the book, I just don’t know if I would recommend it.