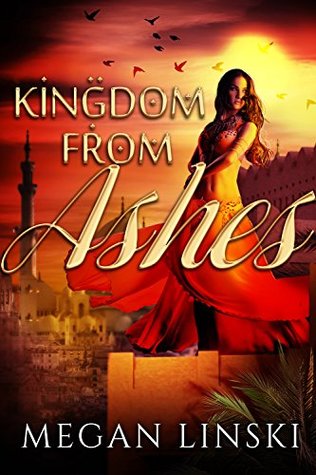 “Princess Bennua is to be married. The daughter of a sultan, her duty is to marry a powerful yet cruel warlord to be her husband, sealing an alliance that will scare the desert of Sahrahn into submission. But the wedding is halted in place when the infamous Raider Prince, king of thieves and leader of the dark city Ashana, threatens to take her city by force.

Sacrificing her freedom for her country, Bennua agrees to accompany the Raider Prince on his travels if he leaves her homeland alone. Stolen from her charmed life Bennua begins to learn the truth of what lies beyond the palace walls and the suffering that plagues Sahrahn’s people. Bennua begins to plan her escape, but the more she learns from the thieves the more she finds herself becoming one of the them…all while falling hard for their leader, the Raider Prince himself.

A portion of the author’s royalties from the sale of each Kingdom Saga novel will be donated to furthering the education of girls around the globe.”

This is the second book I read for the #MakeMeRead readathon and after a disastrous start, I’m glad that Kingdom from Ashes was able to salvage some of the leftovers of my expectations.

I don’t know if there’s a real time frame for Kingdom of Ashes, but it was definitely not modern. Truthfully, it seemed to be set in the Middle East and it had a religion that seemed similar to Islam. For example, the women had to wear veils, they followed a god called Alshams (Allah), women aren’t encouraged/allowed to be in charge (in this book), the men were allowed to have multiple wives while the women were only allowed one husband, and some other things. Although this opinion is coming from someone is who not a follower of Islam, from my perspective, the representation of the religion Alshams didn’t appear to be a mockery of Islam or anything of the sort.

The characters were actually pretty interesting. I didn’t hate anyone, but I wasn’t exactly rooting for anyone either, you know? Of course, I wanted the bad guy to lose and justice to prevail and yada yada, but I wasn’t on the edge of my seat.

Bennua is one of those “I’ve always been different” kind of heroines, but Linski presents it differently. Instead of Bennua always moaning about how different she is or how no one loves her because of her ways or whatever, she only mentions it out loud once. And, here’s the big thing, she cries when she mentions it. I thought that that was awesome. Sure, who doesn’t love to be different? To stand out from the crowd and be unique? But at the same time, sometimes it hurts, because some days all you want is to just blend in for once. So I liked that. I don’t know if Bennua is the leader that Linski tried to convince me that she is, but I definitely wasn’t opposed to the idea.

Okay, real talk: The Raider Prince was boring. *gasp* *record screech* Whaaaat?? The Raider Prince is boring!? Yeah. Yep. Mhm. I was interested in reading about him and everything, but when I did, he just seemed so…bleh. He doesn’t do anything except smile at Bennua and refuse to let her leave his captivity. I was expecting the Raider Prince to live up to his fame, the fame that claims that he can fight remarkably and is super awesome, but he didn’t.

You know what I loved in the romance? It was barely there! Bennua mentions how attractive the Raider Prince is and then that’s it. Sure, she notices his attractiveness every now and then, but she was so focused on her freedom and her kingdom that it wasn’t the first priority on her list. Loved it. What I didn’t love was the insta-love. It’s possible that it wasn’t insta-love, but I just didn’t really see any reason as to why Bennua was falling for the Raider Prince. They did stay in the same house (but no funny business), but I think there needed to be more private (non-sexual though) moments between them so that I could see what was going on there.

The plot wasn’t bad. It’s not like it was predictable, but it also wasn’t complex. I never really saw anything coming, but I wasn’t surprised either. I rolled my eyes when Linski included the cliche “Girl calls out guy’s name and guy gets distracted and gets hurt in battle” scene, but that was the only cliche I remember seeing and so I won’t throw Linski under the bus (you’re welcome 😉 ). I did see some plot holes, like for example Bennua magically knowing the Raider Prince’s real name even though a) there was no way for her to know it and b) she said someone had called him it earlier, but I checked and no one did. Then there was a contradiction (or at least confusion) about the financial state of Haya-Maa. One page said that Haya-Maa “isn’t poor, but neither is rich,” but two pages later it says “Haya-Maa is very prosperous, and has very few poor people.” Right after that, Bennua goes outside to feed the beggars who are sick or old with no family and the only time they eat is when Bennua comes out to feed them. It doesn’t sound like very few poor people.

There were some grammatical mistakes I saw, the wrong use of ‘than’ and ‘form’ instead of ‘from,’ but nothing detrimental.
Would I Recommend Kingdom from Ashes? Sure. I didn’t think it was bad and it wasn’t a waste of time. I’m not impressed, but I’m not disappointed either. I didn’t understand the ending, it was kind of weird, in my opinion. Nonetheless, it’s free, so if you want to try it out, you’re only risking your time.

8 thoughts on “Kingdom from Ashes by Megan Linski”