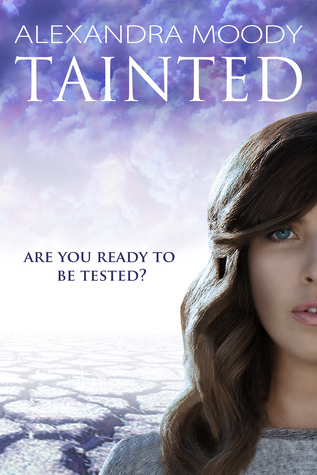 “The ARC: the world’s last chance for survival, but this underground fallout shelter is the last place you want to be.

At the tender age of two Elle Winters lost everything, when the day of impact transformed Earth’s surface into an icy, desolate wasteland. Fifteen years later, all she has ever known are the cold, artificial confines of underground fallout shelter, the ARC. Under the Council’s rule, ruthless officials roam the hallways and community comes first. Everyone lives in fear of failing their annual testing and those that do are deemed tainted—taken away without any warning or a word of goodbye.

No one has been taken in over six months and the remaining citizens of the ARC have slowly begun to forget the danger. Elle remains wary, but even she is beginning to wonder if it’s finally safe to succumb to her feelings towards her closest friend, Sebastian.

But, no one is ever truly safe in the ARC. Elle is about to experience her own personal apocalypse and with nothing left to lose, she will finally attempt to uncover the truth about the tainted.

Will she find what she’s looking for or are some secrets better left buried deep underground?”

Yikes. Tainted took me by surprise. Thank you, Moody, for reminding me that no matter how many books I read, I still don’t know everything.

I’ve been dealing with some pride lately. The other day someone told me, “I’m a quick reader and this book is taking me a long time. I don’t think you can finish it in a day.” Well, my blogger pride was injured and I haughtily thought, Oh yeah? Well I’ve read books in one day and written a review for them! So don’t tell me how long it’ll take me to read a book. Oh my, right? At least my response to her was civil. Meaning I didn’t reply. But why am I telling you that? Because even though I haven’t even reviewed one-hundred reviews yet, and even though I haven’t been blogging for a year and a half yet, sometimes I feel like I already know everything. I judged Tainted and figured I knew everything that Moody had to offer, and thus set my expectations low.

My notes are littered with sarcastic predictions that were, to my surprise, proved to be wrong. Well now.

Elle Winters is an interesting character and I love how Moody ‘used’ her. Elle isn’t trigger happy. Give her a gun, she won’t immediately pull the trigger. Put her hand over a button, she won’t slam her hand down without asking questions. She’s inquisitive, observant, quick on her feet, intelligent, patient, oh, and claustrophobic. I can’t remember the last time, or if there was a time, where I read about a heroine with such a critical phobia or hindrance. It isn’t just a passing fact either, Elle continuously struggles with it and has to fight it to accomplish her tasks. Before I forget, Elle doesn’t cause issues just for the giggles. Even when she has the chance to react wildly during an argument, she doesn’t. Elle instead swallows her anger and responds quietly and calmly. That is just so admirable. I don’t know if I can really relate to Elle (as a whole), but I liked her even still.

I liked Sebastian too, but not as much as Elle. There’s nothing wrong with Sebastian, just that he was admittedly less important, but still super important to me. He seems like a great character and I hope he’s developed more in later books.
The other characters were great too, I didn’t see any that were ‘empty cutouts.’ There were a few plot-pushing characters, but they were reasonable and not everywhere. I think at some point in our lives, we are all plot-pushers in someone else’s story.

Speaking of the plot, I liked the plot too. Nothing was really…revealed at the end, I suppose you could say, but Moody also didn’t evilly try to leave me with a burning desire to find out what happens next. That doesn’t go to say that she didn’t make the mysteries interesting, and I’m not trying to say the book wasn’t intriguing. All I am trying to say is that I felt that Moody didn’t try to cram a ton of stuff into the first book so that you’re left frustrated at a cliff-hanger. Instead, she quietly exhibits her writing skills and leaves you to your own decision and I appreciate that. Tainted somewhat reminds me of another book I read that quietly surprised me, The Cure by Stephanie Erickson. It left such an impact that I even remembered Erickson’s name without having to look it up. I think Tainted might be that way too.

Also, Moody. I have to say. I fell in love with the ending dialogue. I’m sorry, I just have to share it.

He looks at me knowingly, “No,” he responds. “I’m talented.”

UGH. Just ugh. What an amazing piece of dialogue. I love it. I DID cut some things out so that it wasn’t TOO bad of a spoiler, but you know, hopefully I won’t get any angry emails.
Would I Recommend Tainted? In all truthful honesty…yeah! I enjoyed reading it, and although my heart never raced or anything, I found it to be a great way to spend some of my free time. It’s free, anyway, so at least you won’t lose any money if it isn’t your cup of tea, you know? If you try it out, let me know what you think!