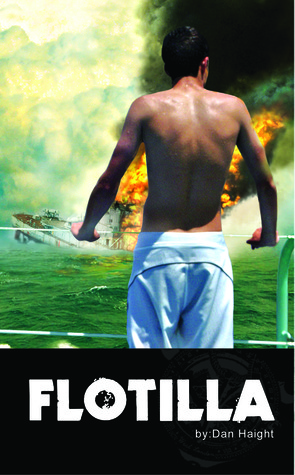 “Flotilla is a book for young adults and fans of Juvenile Dystopian Fiction about the world that is coming to our oceans. Jim Westfield is a messed-up kid thrown into the anarchic community his father lives on where they raise fish on the ocean when they aren’t breaking the law. This is a world filled with strange and dangerous characters that threaten Jim and his family’s lives when a terrorist attack hits Los Angeles. Now Jim must rise above his past if he wants to survive his future.

This whirlwind experience over two summers paints a vivid picture of risk and hardship. It takes a deeply moving look at the impact of sustainable technology on some hilariously dysfunctional characters.

Readers and reviewers are calling Flotilla ‘highly original, ‘intense and action packed’ and ‘for anyone who loves adventure.'”

Today, everyone, history has been made. I remember mentioning my short attention span (at least I think I remember) a couple of times, and yes, it’s definitely still a piece of me. It cackles its way around while I’m trying to focus and oh look! If I enter this giveaway, I could win $10. But wait! Look! Here’s three more giveaways to enter, instead of completing your responsibilities! And that cycle has slurped up a good 5 hours (yeah…5 hours) of my day before. (And no, I haven’t won anything yet.) My friends roll their eyes when they send me a video and I groan, How long is it? Do I have to watch all of it? I suppose it’s pretty funny, considering how many hours I spend reading and working on this blog of mine. But, nonetheless, you didn’t click on this book review to hear about my attention span, so here’s why I mentioned it.

Flotilla took me about (and I used that word loosely) 4 hours or more to read. *Gasp* *Scream* *Evident shock!* I know, right? All the times I’ve complained about a book dragging itself across my eyes as I begged for it to speed up, and I spent 4 hours or more reading one book? And get this: The pace is slow.

Okay. Okay. These aren’t bad things, in case it came across that way. It was just a shocking revelation for me that I stuck with Flotilla. So, why did I stick with Flotilla?

The plot for one thing. I really loved it. Yeah, it moved along slowly, but it was good content. Great content. It left me exhausted, but satisfied. There’s a lot of information to take in, which is why I believe Haight made the book so long, but it isn’t “willy-nilly” information, but information that’s imperative to you understanding what’s going on. My last blog post was on Valley of the Moon and if you read it, you’ll remember that I said that I was upset that Bronwyn Archer constantly made something bad happen to Lana, her main character. Well, Haight did the same thing to Jim, the main character in his story, only it was different. The bad things that kept happening to Jim were realistic to how they would occur in real life. I never got the feeling that Haight was thinking, “Okay Jim, how can I make your life even more miserable while ignoring any suggestion on making your misery realistic and necessary?” with an evil cackle. Instead, it went more along the lines of “Sorry Jim, but this is how the real world works.” And so even though Jim’s circumstances broke my heart, I can recognize that it was necessary.

Speaking of Jim, I love Jim! He was hilarious and smart and witty. Sure, he has issues, considering he’s a (minor spoilers) alcoholic, at the age of fourteen, and he also abuses drugs. But it was obvious that he really wanted to overcome those issues he had. Still, he was a 14 year old so he got angry when people “overreacted” at his occasional backsliding, but I understood. It didn’t stop me from feeling sorry for him though. Jim learned many lessons no one wants to learn even as an adult, much less as a fourteen year old. Many of the problems he faced weren’t even his fault, and yet he was thrown straight into the midst of it, like a fisherman throws chum into the water.

All of the other characters were extremely developed, no cardboard in sight! From Jim’s Dad to Miguel, I loved The Colony (the “anarchic community” mentioned in the synopsis). It was like a large family and, just like a family, each member has their own personality. They had arguments and issues and I loved watching them all interact.

Haight did really well with Flotilla and I don’t even blame him for leaving it on a partial cliffhanger. He made Flotilla the kind of book where if you don’t want to continue, then you don’t have to. You’re not left wondering “Are they alive!?” or “But who did THIS and WHY?” or some other frustrating question. Instead, Haight answers the questions you most likely have and then invites you to ask some more in the sequel, which I really appreciated.

Would I Recommend Flotilla? It depends. If you don’t like to read books that take a while to devour, then you might not like it. But then again, I liked it and I don’t usually like to read books that take this long. Like I said, it’s great content and that made the length worth it. I did take breaks here and there to do some things, which made it easier to process everything since I had time to think about it. There are no boring parts in the book, but it also isn’t constant explosions that make it annoying and overly action packed. Flotilla does tackle some deep stuff though, things like alcoholism and some child abuse (it was one short scene). Even though the main character (Jim) is fourteen, I wouldn’t suggest it to anyone under 16, maybe 15.

I received a free ARC copy of Flotilla in exchange for an honest review via NetGalley.