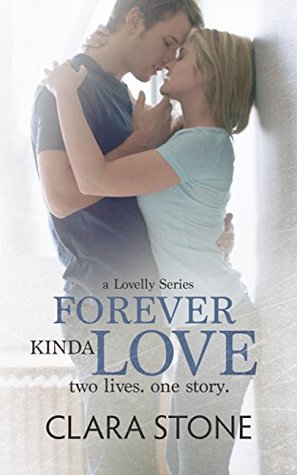 The last thing seven-year-old Carrigan “Ace” Casper foresaw was an eight-year-old Heath Lovelly walking into her life the day her mother died. From that moment on, Heath sticks by her side, slowly becoming her strength, her confidant, and her entire world. What she doesn’t know is, she’s his saving grace, too.

Ten years later, Ace is handed another crippling challenge that threatens everything in her almost perfect life. Only, this time, she doesn’t turn to Heath, hiding the truth instead. But Heath knows Ace too well and won’t back down easily. He’s ready to do whatever it takes and will stay by her side until she accepts that their love is the kinda love worth fighting for.

Will he be her forever triumph or her unexpected downfall?

And an unexpected journey to falling in love.”

Now let me be clear, I can enjoy a romance novel so I’m not biased against them. I started off by liking Forever Kinda Love, I thought it was really cute. Sometimes I even had to put the book down so my mind could process the cute moments. But I don’t know, after a while, it wore off for me.

I didn’t like the characters, but I didn’t dislike them either. They were rather in-between. I’ll talk about Heath first.

I was falling in love with Heath when I first met him. Some of the things he does were really sweet and I liked that side of him. He had a good backstory, one that was believable, and I loved the interaction that he has with his family. I appreciated that Stone incorporated Heath’s family into the story because I feel that that was one of the main reasons why the story even ended like it did. It also showed me how much Heath loves his family and leans on them for support. What I did like about Heath was certain reactions that are becoming more common. Heath was extremely prone to violence. I get it. You love Ace and you don’t want any man coming in between you and her. But it was genuinely scary how Heath was always ready to punch any guy that talked to Ace. At one point, Ace talks to another guy and this is Heath’s reaction: “I round the corner separating us and see her touching another guy. A growl threatens to pour out of me. I don’t care if he’s interested in her or not. My heart beats fiercely, trying to break free. I smash my fist into the wall beside me.” Okay, hold on, what? Since when do men growl? Have any of you ever heard a man legitimately growl? If Heath doesn’t care if he’s interested in her or not, that means all he really cares about is that other guys talk to her which is a red flag! There’s being protective and even (at an appropriate level) possessive over someone you love, but it’s not cute/sweet/he just really loves me when he doesn’t want you talk to any guys. That’s a major warning sign. I also didn’t like how Heath reacted when Ace had a panic attack. Ace says, “After my small panic attack earlier, Heath’s patience seemed to decrease. Little things irritated him, like when he tried to open a Pepsi can and the ring snipped, he shoved the whole thing in the trash.” I don’t know, I agree that when the ring pops off it’s extremely aggravating, but I felt that Heath was overreacting.

Apparently Ace has a foot fetish and that cracked me up when I read it. It wasn’t much, just her thinking “Bare feet on a guy…yum.” but I found it hilarious for whatever reason. I didn’t mind Ace too much. I felt that she was a rather real character and that Stone did a fairly good job writing her. I didn’t like that she was going to use a guy for her own purposes and I’m glad that it didn’t work out. There wasn’t much to her, in my opinion, although she experienced a lot, but I still thought she was pretty cool.

I loved Vincent, Harrington, and Rock and I would love for there to be stories about their lives. I admit that I was more interested in them than the actual main characters.

There were some scenes that were more sexual than I like, but it was still appropriate. I was relieved to see that Stone didn’t have them equate love to sex and immediately dive into bed together.

As for the plot, it was pretty good too. I guessed the ending before I even reached the halfway mark but that didn’t bother me too much although it was cliche. I wasn’t impressed, but I suppose I wasn’t disappointed either. If there was anything that I liked, it was that there was no ‘Barbie’ name calling. I’m sure you’ve come across it at least once, where the popular girl is called a blonde bimbo or a Barbie or plastic or something along those lines. The popular girl was indeed dating the love interest, but in my opinion she wasn’t completely a jerk. Towards the end I would agree that she was (a jerk), but in the beginning, she said this to Ace and it was refreshing, “You know, I’m not just being nice because of Heath. You’re a great asset to our team and a really sweet girl. I don’t want to lose you because you’re overwhelmed. Sometimes, it’s okay to ask for a little help.”

Would I Recommend Forever Kinda Love? I’m not sure that I would. For $1.99, I wasn’t impressed and I can’t say that it was something I would want to read again. I don’t want to be harsh with my words since Forever Kinda Love wasn’t terrible, or at least not as terrible as it could have been, but I don’t think it’s worth paying that much. If you’ve read it or plan to read it anyway, let me know what you think!