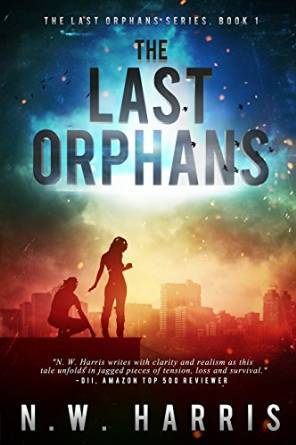 “One horrifying day will change the life of sixteen-year-old Shane Tucker and every other kid in the world.

In a span of mere hours, the entire adult population is decimated, leaving their children behind to fend for themselves and deal with the horrific aftermath of the freak occurrence. As one of the newly made elders in his small town, Shane finds himself taking on the role of caretaker for a large group of juvenile survivors. One who just happens to be Kelly Douglas—an out-of-his-league classmate—who, on any other day, would have never given Shane a second glance.

Together, they begin their quest to find out why all of the adults were slaughtered. What they find is even more horrifying than anything they could have expected—the annihilation of the adults was only the beginning. Shane and his friends are not the unlucky survivors left to inherit this new, messed-up planet. No, they are its next victims. There is an unknown power out there, and it won’t stop until every person in the world is dead.

A spine-tingling adventure that will have you gasping for breath all the way until the last page, The Last Orphans is the first book in an all-new apocalyptic series.”

This was just poor quality. The Last Orphans is completely devoid of substance, conviction, development, and logic, while overflowing with poor writing, poor characters, and a poor plot.

Shane Tucker is a seventeen year old kid and, I was actually interested in reading about him. Harris gives you a glimpse of Shane’s life and the daily demons he wrestles with before he whips that view away and thrusts you into the action. And it left me a very disappointed reader.

In a few books I’ve recently read, I’ve seen this recurring theme: Action = Substance. NO. They are not equivalent! Substance = 4(Characters) + 5(Plot) + 5(Writing) + 0.5(Action). Plot and writing is multiplied by 5 plus characters which is multiplied by 4 and then you add the action times one-half. That is (roughly) the equation that will equal substance.

A little bit of math there, but don’t worry, it’s all over.

Looping back to Shane, as I said, Shane has a life that I was looking forward to reading. While the ominous foreshadowing and then the actual events were (at first) interesting, I wanted to get to know Shane. It was impossible for me to form a connection to him or his grief because Harris didn’t give me a chance to. Instead I was pushed and shoved, like a lingering child during a school outing, while Harris hollers “Stop dragging your feet and move along!  We have action to get to, Paige, stop looking for depth in the characters!” I was forced to forget about Shane’s personality and move on directly in the action and even though there were many things Shane had to grieve about, I didn’t care because I saw him as a book character, not a person.

The same goes for the rest of the characters. We were introduced, a mere handshake, and then they dramatically threw themselves into action. They were merely names on a page and I didn’t mind if something happened to them because I wasn’t given any reason to. There was no depth, I knew none of their backstories, I barely knew their personalities, but was sparingly given through dialogue, and they were all flat.

The plot was just as flat. You can get the gist from what the synopsis gives you, but what you don’t know is that there are so many ‘rules’ that are made, but then broken, that the situation isn’t really all that horrifying. One example I can give, that wouldn’t be a spoiler since it’s explained in the synopsis, is how the adults die. Of course, almost immediately, all of the adults die from different causes, absolutely no pause or fighting, they just give in. The synopsis says, “they [Shane and his peers] are its next victims,” but lo and behold, when it’s convenient, they’re able to remain generally okay for a good half hour to an hour before there’s any real concern. While yes, I understand there needed to be conflict and an “edge of your seat” moment, this isn’t the way to go about it. This was just a flimsy loophole that had no explanation as to why it was a loophole.

Out of everything, I did like one part. In the synopsis, Kelly Douglas is obviously painted as Shane’s crush. I really really appreciated that Harris didn’t use the circumstances to make them fall in love. I liked that they both stayed focused on the pressing matters at hand rather than desperately try to spark a flame between them. There were some (appropriate) intimate moments, more emotional than physical, and they were well placed.

Would I Recommend The Last Orphans? I’m afraid not. The book is free, so it wouldn’t harm your wallet to buy it, but I didn’t find it enjoyable. It is an excellent idea, but it needs to be delivered much better.

16 thoughts on “The Last Orphans by N.W. Harris (Review)”