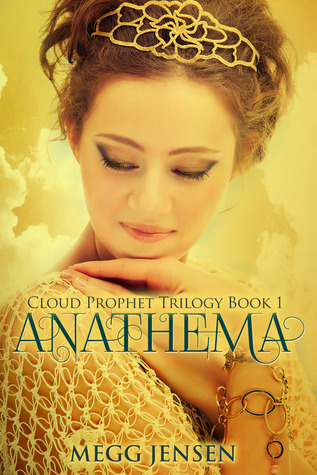 (credit) (Note: This is the older version of the cover, I liked it better than the others)

“Forget prophecy. Make your own destiny.

Reychel is a slave girl surrounded by magic, lies, and manipulation. Her best friend disappears in the middle of the night leaving Reychel to face her fifteenth birthday, the day her master burns his brand into the back of her bald head, alone.

Sheltered from the outside world and without any hope for escape, can Reychel learn to believe in herself?”

Maybe I’m getting old. Perhaps that’s why I often find myself guessing the plots of YA novels and essentially ruining it for myself. It’s very disappointing, but also inescapable. How do you tell your own mind “No spoilers!”?

Anathema has been on my “want to read” list for quite some time. “Quite some time” meaning since January 9th (2015), when I bought it. Why did it take me so long to read it? I can’t give you a solid reason, but from what I read, I wasn’t missing anything.

The synopsis lured me in, but the writing and plot let me down. Let’s talk about why.

I had an issue with Reychel. She was a shell of a heroine. I don’t mean a sturdy exoskeleton for a great, admirable, heroine, unfortunately no. Reychel was the equivalent of an eggshell. I understand that her knowledge of the outside world is limited and I suppose the concept of people having ulterior motives was lost on her too, but it was just sad. At one point, she even says she’s tired of accepting what other people tell her as the truth, but after that, I suppose she shrugs and no longer cares because it isn’t mentioned anymore and she continues to accept whatever people tell her.

(This is only a minor spoiler, but I changed the color anyway) There was also the “I’m not special” part of her. Yes, yes, the heroine never thinks she’s special, but surprise! she is special and she’s going to save the whole world/her family/her village. While a few people around Reychel were blatantly telling her that she was special and she went “no no, definitely normal. :)” What? Was this to make the plot go slower? Was it so that Reychel would resemble teenage girls more?

I honestly can’t tell you much about Reychel, which brings me to my main point. Reychel was severely underdeveloped. The amount of depth she had was that of a side character or, even more specifically, an extra in a movie who appears in the credits as “Person #5 in Crowd.” Who is Person #5? What’s their story? Who knows! That’s how it was with Reychel.

In fact, none of the characters had much depth. The hollow of a newborn baby’s hand had more depth than off all of these characters combined. Each and everyone one of them were created solely for convenience and it was obvious. This character was needed to make sure the two main ones would get someplace safely. That character was created in order for the main character to specifically learn something about someone they know. And so on. This isn’t how great characters are made.

The plot and writing were just awful. By the time I had reached the sixty-seven percent mark, I had officially figured out the entire plot twist. How did I do that? Poor foreshadowing. There’s a single paragraph of dialogue that confirmed everything I had guessed. It almost completely exposed everything that would happen in the next chapter or two. This is not how to foreshadow.

In general, there was no real plot. It starts off with Reychel as a slave, then some irrelevant (plot pushing) events happen, (minor spoiler)the “woah I’m magical!” moment, and then she makes a dumb decision against wise authority that somehow works out. There is honestly no way that Reychel could have gone from a meek and submissive slave to a bold and commanding leader, there’s no way! Especially not at fifteen.

There were so many plot holes. A person would say “Well, he couldn’t do this because that awful thing would happen.” but then later on (once it’s convenient) that same person does the thing they “couldn’t do” and it turns out just fine. Or another character would say “But I’ve never seen this before!” but then remember “Oh wait, yes I have.” Once again, this would only happen when convenient.

What would a poor plot be without instant love? The romance started off slowly as if to trick me into thinking it was realistic and then nope! Instant as always. They talked maybe five times altogether and now they were definitely in love. Completely disappointing.

Would I Recommend Anathema? I won’t even waste my breath: No.