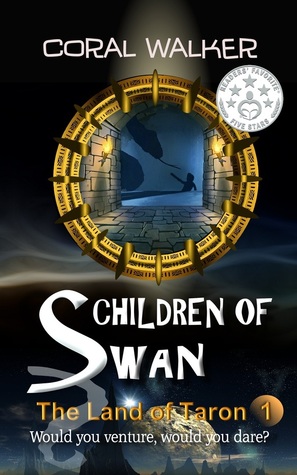 “There is something small and peculiar in young Bo’s hand — it’s Dad’s ring. How could Dad have left without the ring?
Bo is abducted. Chasing after him, his older siblings Jack and Brianna dive into a wormhole that takes them to the land of Taron, a perilous land fuelled by hatred and plagued by vicious snake-like, man-eating bokwas.
Blue-skinned Baran people catch them and sell them to an arena where Barans entertain themselves watching slave boys fight to the death. Dad is there, staring at them like they are strangers.
The contest is brutal; the rules are clear — one game, one survivor.
There are boys as young as Jack. Can he kill?
And there’s Brianna, the one he has spent all his life squabbling with, and the last person he thought he would care about. If he doesn’t kill, she will die.
There’s no choice. He must kill, for Brianna, for Bo …”

Have you ever lost something and you look around for it, but it isn’t in its usual place and you just can’t seem to figure out where it went? That’s how it felt reading Children of Swan: The Land of Taron because much was missing from it.

You need depth in most, if not all, things when it comes to writing. Characters, plot, worlds, even the conflict must have depth. But I couldn’t find depth in Children of Swan.

The worlds, firstly. Earth, Cygnore, and then of course, Taron. I already know what Earth is like (surprise!) but I don’t know what Walker’s dying Earth is like, but it wasn’t mentioned or explained so I still don’t know. I vaguely know of Cygnore and even more vaguely know of Taron, besides the fact that they have slaves, blue and red people live there, and they have some barbaric spin-off of the Roman colosseum/Roman gladiators only with children. You have to give more than just a few descriptions and call it a day. It is crucial to any story to build and create the world that your book is in, especially if it is a world you made up, so that the reader can explore it.

The plot was non-existent, but it was hidden by the amount of action that was included. It felt like when you’re watching a movie and there’s an intense action scene. And everyone is yelling, punches are being thrown, people are jumping around wildly, random screams are erupting from the left and right and who knows where they’re coming from, loud explosions are happening everywhere, and your eyes are flicking back and forth and your brain is screaming ACTION ACTION ACTION NOISE NOISE NOISE, but you’re not really sure who is good and who’s bad and who’s winning and who’s losing. That’s how it felt, but not for a few minutes like in the movies, but for the entire book save for a few pages in the first chapter. Here’s one scene that contributed to the “who’s winning??” Confusion. Names omitted:

“With a yell, ***** made a mighty strike. Stepping backwards awkwardly to dodge the attack, the youth bumped into the injured boy, who had just managed to get to his feet. Without warning, the boy clung on to the youth and wrapped his arms like ropes around the youth’s waist. Together they dropped backwards. There was an ominous sound of a knife piercing through flesh. As they slumped to the ground, the same knife that the youth had stabbed the boy with pierced his own body.”

I was completely lost as to who was dying and who had tripped and who in general with this scene. Can you decipher it at all? The word ‘boy’ ends up being used eighty-eight times and the word ‘youth’ appears thirty times (throughout the book). There have got to be other words because these were overused and only made me feel lost.

However, back to the plot. I honestly couldn’t find one. I knew what the overall objective of the entire series is, but the synopsis told me that. There needed to be substance in the actual book in order for me to want more and there was none.

The action got in the way of the characters too. Each character, but one was flat, one-dimensional, and many were unnamed and clearly only served the purpose of moving the plot farther. The characters lacked proper responses to situations that should have at least elicited at the very least gasp, they had no backstory/background (even though a great background could have been done concerning their adoption), and they were given skills that were convenient even though they shouldn’t have had any. The one character I mentioned that was one-dimensional I cannot name because it would be a spoiler, but he wasn’t even a main character. I knew nothing about him, but I still loved him the most. He had obvious potential as a character and I’m more interested in him than anything else. I hope he’s developed more later on in the story.

I was on the fence about including this part, but I went through my notes and I’ve since changed my mind and I will include it. Towards the middle of the book, I started to pick up an incestual vibe between Jack and Brianna. There were scenes like: “She [Brianna] thought of Jack, almost intimately. She had never thought of him in such a soft light, and her new perspective on him surprised her and made her blush for being so out of character. But the more steps she tramped, and the more she thought about it, the feeling grew stronger and clearer.” How often do you think about your brother intimately? Here’s another scene: “The mere sight of her [Brianna] shook him [Jack] and struck him with an emotion raw and fervent, as if he had been longing to see her.” I’m honestly sick. Maybe this wasn’t intentional, although I don’t see how it couldn’t have been, but this isn’t something I want to read. Ever. My original rating was around a 2.5, but after reading those scenes (and there are others than just those two), my rating dropped lower.
Would I Recommend Children of Swan: The Land of Taron? I’m afraid not. I was told that Children of Swan is one novel released in three volumes, but that is very difficult to do because you lose important aspects that one novel should have when it’s stretched over three different books. As such, I didn’t find it enjoyable, it lacked a proper plot and the necessary world building, there was of course, the weird implication of incest, and it was overall quite boring.

I received this novel for free from the author in exchange for an honest review.