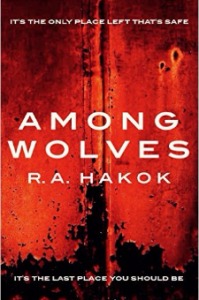 “It has been ten years since the Last Day, and the Juvies huddle inside the mountain, waiting for the world to thaw. But outside the storms still rage, and supplies are running low. Kane says they are the Chosen Ones, but sixteen-year-old Gabriel isn’t so sure.
Then while out scavenging Gabriel finds a bloodstained map. The blood’s not a problem, nor are the frozen remains of the person it once belonged to; there’s far worse to be found in any Walmart or Piggly Wiggly you care to wander into. Except this one he recognizes. It shouldn’t be here. Now all Gabriel can think of is how he’s going to get back to Eden and let Kane know what he’s found.
But Gabriel’s troubles are only just beginning. For things are not as they seem in Eden, and soon he will face a much larger problem: how to get Mags and the other Juvies out.”

I don’t think I ever want to read Among Wolves again. Confused?

Because it was just that amazing and terrifying.

I was honestly expecting Among Wolves to be a bad cliche book. The synopsis tipped me off with the key phrase “Last Day.” What cliche Young Adult novel in the apocalypse genre doesn’t have something along the lines of “Last Day” to mark the final day everything was fine with the world? So, my expectations were rather low and although low expectations are easier to exceed, Hakok did not take any easy routes to impress me.

The synopsis is rather vague so I don’t want to spoil too many things, but I still have some things that I want to mention.

The characters were solid, incredibly solid. They each had more depth than a 10 foot deep swimming pool and I relished it. Gabriel, Mags, The President, and all of the people who live inside the mountain were never merely pawns for Hakok to use as one-dimensional characters who push the plot along. They were real. So real, in fact, that when there were deaths, I felt actual sorrow. Yes. I felt honest emotion over the death of a character in a book, which I have not felt in a very long time. My only complaint was the awkward inclusion of homosexuality. That doesn’t go to say that it wasn’t plausible, just that it seemed to be given to two characters as a last minute idea/shot at having diversity. It was too brief to really be considered a major character-identity reveal and it felt like its sole purpose was to push the plot along. Besides that, I’m not really sure that it added any type of substance.

While we’re on the topic of death, any YA author who reads this needs to take note: Don’t Overdue Death. Hakok had the perfect amount of deaths in his plot. Many books have characters dying left and right and up and down and eventually you don’t care about who’s dying. And other times, there are barely any deaths, which is unrealistic. But Hakok managed to find that sweet spot in the middle where there are enough deaths to make it realistic while keeping me emotionally connected.

Read this excerpt from my notes: “Never, in all of my memory, can I remember being genuinely terrified while reading a book.” I wrote this immediately after I finished Among Wolves and it’s the honest-to-goodness truth. The latter part of the book consisted of horrifying ordeals that were realistic and even though I desperately wanted to continue, I was scared the entire time. Truly, be afraid of an author who can make you feel this way. Hakok’s writing is exceptional, which is evident in his sound plot-building, excellent world-building, and authentic character-building and I am extremely pleased that I was able to read his work.
Would I Recommend Among Wolves? Dare you even need to ask? Most definitely. It’s worth every second spent reading each word and even worth paying for, although it is free. While, yes, I could not read it again (I’m not sure if my heart could take it), I highly suggest you read it.