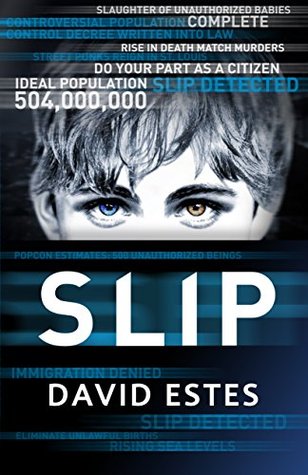 “Someone must die before another can be born…

As sea levels rise and livable landmasses shrink, the Reorganized United States of America has instituted population control measures to ensure there are sufficient resources and food to sustain the growing population. Birth authorization must be paid for and obtained prior to having a child. Someone must die before another can be born, keeping the country in a population neutral position at what experts consider to be the optimal population. The new laws are enforced by a ruthless government organization known as Pop Con, responsible for terminating any children resulting from unauthorized births, and any illegals who manage to survive past their second birthday, at which point they are designated a national security threat and given the name Slip.
But what if one child slipped through the cracks? What if someone knew all the loopholes and how to exploit them? Would it change anything? Would the delicate resource balance be thrown into a tailspin, threatening the lives of everyone?
And how far would the government go to find and terminate the Slip?
In a gripping story of a family torn apart by a single choice, Slip is a reminder of the sanctity of a single life and the value of the lives we so often take for granted.”

Alright Estes, no need to beg on your knees, I’ll write a review for the first book in the Slip trilogy. (Merely a joke to do with his message to the reader)

Slip took me on a fascinating, but often confusing journey through yet another dystopian world. The United States, now renamed Reorganized United States of America, has a new population control method that, according the statistics, works flawlessly. Unless…until, there is an UnBee, or Unauthorized Being, or, even worse, a full-blown Slip.

The rabbit hole never seems to end in this book. There is so much secrecy, so many lies, so many hidden motives and identities, that sometimes I would just be plain lost. Why is this guy like that? Who has this name? Why do they have the same name? Wait what? But by the end, “all was revealed” and every loose end, every unexplained mystery made painful perfect sense. Like many books that I enjoy, I won’t give away any spoilers and even names would actually give away a large piece of the plot so forgive me for being vague.

I loved the characters and the families that are slowly shoved into the conspiracy that makes up Slip. They were all so real and I felt for each of them in their different circumstances. I wish that they had secure happy endings, but that isn’t how the world works is it? Each personality that was involved in the making of the Slip trilogy (so far) are so intricately complex and quietly (and sometimes not so quietly) explored.

The plot is completely sound, from what I can tell you.The best part about reading a good book, personally, is that as a reviewer I am always analyzing any book that I read. I’m trying to figure out what I did like, what I didn’t, if the plot-holes are as abundant as the potholes in PA, and all of the things that reviewers think about as they read. So, when part of that scrutiny disappears as I read, I am  impressed. Estes did well with his writing. To give you a two examples, here’s the way he describes the beginning of a kiss: “…like an artist’s brush on canvas as they caress her own.” Is that not a masterpiece? Estes would give more information on the world that these characters live in through old articles and adverts that would appear usually at the end of each chapter, which I seriously loved. It didn’t feel like an info-dump or a lazy way of explaining things without dialogue, but a great way for me to learn vital information about the future world.  I am very pleased that I got a chance to read Slip. And honestly? I might not even mind seeing this made into a movie. If it ever does, I hope Logan Lerman plays the main character, he looks really similar to the kid on the cover.

Would I Recommend Slip? Yes, in fact, I would. I enjoyed the mystery, the slight touch of romance, the continuous lies and desperate choices that were slowly unraveled. It was a rollercoaster worth riding. I did want to give a warning however, there is a story told about rape that may or may not be triggering for some readers.

One thought on “Slip by David Estes”