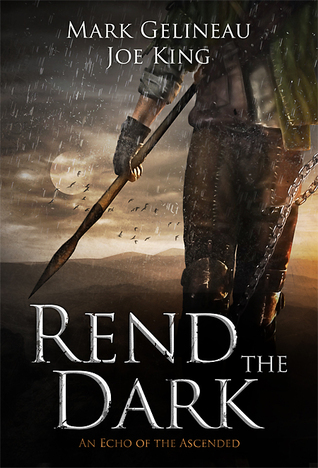 Official Rating: 4/5 (on a novella scale)

“The great Ruins are gone. The titans. The behemoths. All banished to the Dark and nearly forgotten. But the cunning ones, the patient ones remain. They hide not in the cracks of the earth or in the shadows of the world. But inside us. Wearing our skin. Waiting. Watching.
Once haunted by visions of the world beyond, Ferran now wields that power to hunt the very monsters that he once feared. He is not alone. Others bear the same terrible burden. But Hunter or hunted, it makes no difference. Eventually, everything returns to the Dark.”

This was a fast-paced and fascinating novella. I liked that it took me no longer than an half an hour to read (although the original expected time of completion was an hour) and that it was packed with action and slivers of wisdom and honor.

Considering that this is a novella, I cannot say much because it is short and also so that I don’t reveal any spoilers, but I connected with the characters, Ferran especially. I believe that although none of the characters (save Ferran) were given a backstory as of yet and there wasn’t much exploration of their personalities, Gelineau and King left a promise behind to give them depth. And I do believe (and hope) they will keep that promise.

My only complaint is that as the story continues, the action scenes seem to be recycled. Although the actual scene that is taking place is different, the way it is described doesn’t change. The same phrases were used with a little to no changes made and that made each scene a little bit less ‘originally’ vivid. Nonetheless, Rend the Dark was still great to read and I would even be interested in reading the sequel.

I received this novella for free via NetGalley in exchange for a honest review.