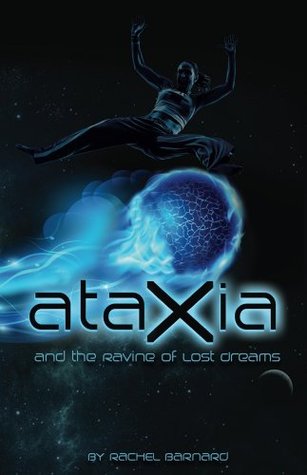 “As the U.S. government prepares to take over the world, MC infiltrates one of their elite academies that trains future leaders. MC must rise to the top in the Cube training grounds in order to be placed high up within the government so she can stop them in their takeover.

It is not until her fourth and final year at the academy that her top-student status is threatened by the sudden arrival of Li, the new transfer student. MC is completely focused on her self-created mission until she gets sidetracked by Li, who might be bad news in more ways than which she bargained.”

I’m no stranger to imagination. In fact, I partake in imagination through my day every day. And it is infinitely easier to imagine that you’re on a different planet when you’re creating the scenes in your mind, than it is to write a book about those very scenes. Even so, I was still disappointed with Ataxia and the Ravine of Lost Dreams.

I couldn’t quite place my finger on what I was feeling until I was on the last four minutes of the book. But it was that I felt like the story wasn’t real.

Now before you raise an eyebrow at me, let me be clear. I know that fiction means none of what I was reading was real. But I expect it to feel real. I expect to be so enthralled in a story that I forget that I will eventually return to reality. And Ataxia just didn’t pull through.

Meet MC. No, that doesn’t stand for Main Character and even if it did, that would be unbearably foolish on Barnard’s part. You never find out what her actual name is and frankly, I didn’t care. She’s supposed to be the main character, but I wasn’t buying it. Nothing about her made me believe that she was a heroine, a brave person, or capable of doing even the simplest of tasks to save a cat from a tree, much less people from a government. Not to mention that she was terrifyingly naive. If someone tells you that you’re somehow involved in a super secret society that you didn’t know about and this society needs to find the government, what would your response be? Certainly not: Okay! That sounds amazing, I’m totally in! And even though I don’t trust you, I will listen to all the information you give me and even follow you blindly to a location I’m unfamiliar with. At least, I hope that that isn’t what your response would be.

MC is also rude. Twice she yells severely unkind remarks at two of the very small amount of people who actually care about her. She also hurts a third person and then forgets to apologize until someone makes her. A leader of any kind has to be able to hold their tongue when they are angry over trivial things until they can speak calmly. I don’t expect MC to always do react in such a manner since she does has to develop this type of response to situations, but I was still unimpressed by her complete lack of self-control.

The only aspect of Ataxia that was done somewhat correctly was the romance. MC’s interest in the future male significant other was realistic, even when she was first exploring it. However, it was still a largely physical relationship, and I don’t see what either parties are attracted to.

The whole ‘I must overthrow the government’ plot felt like a half-baked subplot. There was nothing exceptionally wrong with Barnard’s writing, besides having two characters nickname another character ‘Barbie,’ (why is this such a ‘necessary’ nickname for certain girls?) but it felt as if she had originally wanted to focus on MC’s time at the Academy. Then, later on, the overthrowing the government plot was slipped in as if a friend had said ‘you know, most dystopian novels have the main character try to overthrow the government.’ It was never explained as to why the government needs to be overthrown because from what I had read, people were happy. I never heard complains of mistreatment from any of the characters, not even MC. So what’s her motive? I still don’t know who MC is, her full name, her backstory (or anyone’s backstory), and why I should care about her. You cannot have a series where the origin of the main character, her motive, and other essential things are introduced in the sequel. It cannot work because there is no reason for the reader to go on. There’s no suspense, since I don’t care about the character or what happens to her, there’s no interest regarding how MC will destroy the government since I don’t feel like it needs to be destroyed, there is nothing that makes me want to continue. I believe that it would have been much more interesting in Barnard had focused on MC’s life at the Academy, which was actually intriguing and I’d like to have learn more about the games and activities it had to offer as well as her relationships inside the school.
Would I recommend Ataxia and the Ravine of Lost Dreams? As interesting as the title and cover were, I’m afraid not. It held nothing of actual substance that would have made me consider suggesting the book to anyone.