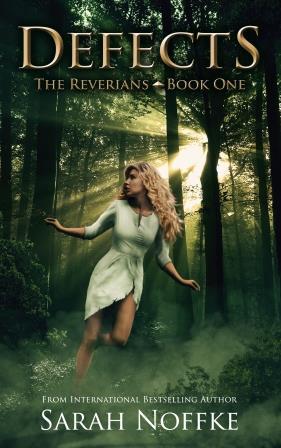 “In the happy, clean community of Austin Valley, everything appears to be perfect. Seventeen-year-old Em Fuller, however, fears something is askew. Em is one of the new generation of Dream Travelers. For some reason, the gods have not seen fit to gift all of them with their expected special abilities.
Em is a Defect—one of the unfortunate Dream Travelers not gifted with a psychic power. Desperate to do whatever it takes to earn her gift, she endures painful daily injections along with commands from her overbearing, loveless father. One of the few bright spots in her life is the return of a friend she had thought dead—but with his return comes the knowledge of a shocking, unforgivable truth. The society Em thought was protecting her has actually been betraying her, but she has no idea how to break away from its authority without hurting everyone she loves.”

What an amazing ride. I have read countless paranormal books filled with people that have super powers or special abilities of some sort. But this one as truly impressed me.

Em Fuller is an amazing young woman. She endures constant verbal and sometimes physical about from her entire family save her younger sister and her ‘tutu.’ Yet, she manages to stay a lovely, but rebellious woman that always asks questions and never accepts the truth from liars. After being brainwashed for seventeen years of her life, she finally finds the truth and makes choices recklessly, but also carefully. You would think that that wouldn’t be possible, but it is with Em. There are many things that she doesn’t know about herself that she is exposed to later on and it makes this read that much more interesting. Unlike normal books, the plot doesn’t start with Em hating the government. It starts with her compliant to it, respecting it, and then realizing otherwise. I loved that. I already knew the government was corrupt, it always is in Dystopian novels, but it was still incredibly engaging to find out why. Em also doesn’t look in a mirror and describe herself, an easy way for authors to give details about the character, instead, she focuses on true matters at hand. (Because really, main characters already know what they look like, why would they randomly describe themselves?) Em remains focused, curious, and determined throughout the entire plot, never giving up, always thinking, and always planning. She was an incredibly lovable character.

Although I loved the characters (except an obvious few), I would have to say that two of them I really adored. Unfortunately, I can’t say much since any name besides Em would be a spoiler, I will tell you that every character had a purpose. Even ones that were added at the very end were important to the plot and none of them were simply included for no genuine reason. They each had a specific goal and while, yes, they do push the plot along, that wasn’t their sole purpose.

The plot was superb. Noffke put sincere thought into it and it clearly showed because of her writing style. There were no convenient saves, lucky coincidences, or anything irritating of the sort. Instead, Noffke wrote an original telling of Em Fuller’s life and I loved every minute of it. Everything was detailed, but it wasn’t overdone, and the constant suspense near the end nearly had me skipping to the end of the pages to make sure I wasn’t going to be devastated. Even the romance impressed me. The way she introduced the romance part was obvious, but not overbearing. In addition, I was delighted to see that both parties in the romantic pairing were focused on the task at hand. Often times, when there isn’t a painful love triangle where no person can think straight, only the heroine is concerned on matters besides kissing. But Noffke had both persons be completely determined to take care of pressing issues while still being in a relationship. That’s how it really works: A few kisses here, the love interest calling each other ‘babe’ here and there, but also devoted attention to problems that needed to be resolved. It was orchestrated beautifully. I truly have to commend Noffke for this literary composition.

Would I Recommend Defects? Is it not obvious by now? By all means, find this book in whatever form you can and read it.