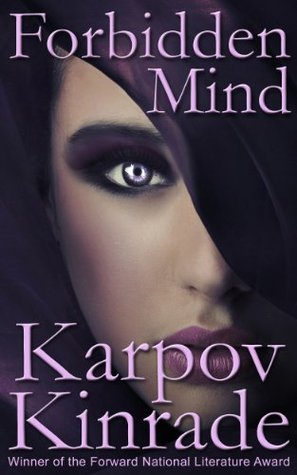 “49% of Americans believe their government officials are honest. I don’t know these officials, or their supporters, but I know their secrets, and 49% of Americans are wrong.
My employers pay me well to be right, to know things others can’t. But I don’t know why they brought that boy in, strapped to a stretcher, barely conscious. He asked me for help when I could give none.
I’m a wealthy spy, a talented artist, a martial arts black belt, and a prisoner. They tell me that on my eighteenth birthday, I will be released, free to go to the college of my dreams. It’s my eighteenth birthday, and a man in black is at my door. I know he’s not here to free me.
I know, because I can read minds.
My name is Sam, and this is my story.
So begins the tale of Sam and Drake–from the time they link minds, forging a bond that leads to an unconventional romance–to their fight for survival against the corrupt, twisted organization known as ‘Rent-A-Kid.'”

I was pleased with many aspects of Forbidden Mind. The romance, the characters, the plot, even the writing. It wasn’t a hard book to read and although I always try, I couldn’t find anything to truly gripe over.

Sam was a great female main character. You do have to wait a couple of chapters before she develops as a character, but it’s worth the wait. It was well placed, well written, appropriate, and I loved it. She ignored the consequences that may arise, even to her immediately physical health, and pushed until she did what she thought was right. That is true character development. I respected her after seeing that and it truly was the stepping stone for all of the growth that would take place. She didn’t cry much which was rather nice. Sure there were tears and sobbing every now and then, but overall she kept herself focused on the many tasks at hand without having a mental breakdown every two minutes. Would I blame her if she had had mental breakdowns? Nope. But the fact that Kinrade didn’t make her have three million in the course of five chapters was awesome. The way she handles her powers are amazing, there is constant self-control and it’s evident throughout the plot. As Sam learns things about the place that she has been for the past 18 years, which the she and the students call “Rent-A-Kid,” she doesn’t immediately believe that she must be everyone’s savior. There was no: “I am the only one who knows. I must save everyone.” or “I sobbed for the loss of my innocence. I now knew something so great, so powerful, that I had to do something. The task was completely and solely up to me and I felt the weight on my shoulders.” Nope. She included people (the ones she trusted) and didn’t try to save her world all on her own. That is a characteristic of a leader.

The other characters like Drake were pretty well-rounded as well. Drake especially had depth that I was really enjoying. His backstory was raw and emotional and so was he in the way he was completely realistic given his past. I loved how he interacted with people, with Sam, his integrity, and some of the thoughts he has. He handled things in stride, even when disoriented, and thought logically but didn’t shy away from his emotions. It was amazing to see a male main character be vulnerable and even emotionally open. The absence of ridiculous scenes where the male is ranting to himself about how he can’t say this or can’t say that with no reason (or it is implied/said that he would be seen as a ‘girl’ or ‘baby’) was wonderful.

The plot was excellent, maybe a bit condensed because of the length of the book, and there were some plot pushers, but I did like it. I didn’t mind the pace, I felt it was appropriate, but if a bit more chapters were added in so that I could have received more information, I wouldn’t have complained. As I said, I did like the pace, but some things happened too quickly. (Going to try really hard not to write a spoiler) In one incident, both Drake and Sam go from absolute disgust, outrage, and horror to almost immediate acceptance and suddenly love (not towards each other). It was weird because of the type of circumstance it was and I don’t think that if I was either Sam or Drake, I would’ve have been okay with everything as quickly as they were. Besides that, the romance didn’t feel forced since the bond wasn’t formed physically first. Maybe the ending was a little bit odd, but I can’t say I have anything to gripe over.

Before I finish up, I have to talk about one last part of Kinrade’s writing. Remember how I said Sam didn’t take all the responsibility on her shoulders and run with it because she’s the heroine? If I was forced to name one thing I adored about Forbidden Mind, it is that Drake and Sam worked as a team (along with some others). As a matter of fact, today I had a complete conversation with a good friend of mine on how so many heroines absolutely must be the leaders and there’s no room for anyone else to help. This wasn’t how Kinrade wrote his book. Instead, Drake and Sam are a team and work as one. No one claims leadership over the other and they respect each other as equals. The Young Adult genre needs to see more of that kind of hero-and-heroine action.
Would I Recommend Forbidden Mind? Yes. Forbidden Mind is an easy book to read and enjoy. It lacks many negative things that I’ve ranted about in previous reviews and includes even more positive features that I find myself often begging authors to include. Plus, it’s at the low price of free, how can you beat that?