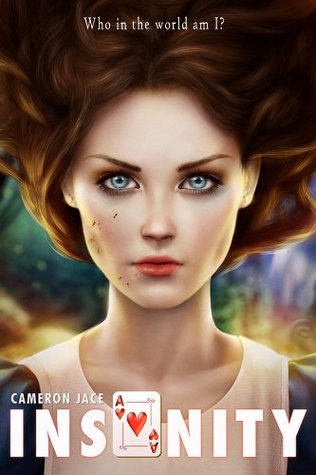 “After accidentally killing everyone in her class, Alice Wonder is now a patient in the Radcliffe Lunatic Asylum. No one doubts her insanity. Only a hookah-smoking professor believes otherwise; that he can prove her sanity by decoding Lewis Carroll’s paintings, photographs, and find Wonderland’s real whereabouts.
Professor Caterpillar persuades the asylum that Alice can save lives and catch the wonderland monsters now reincarnated in modern day criminals. In order to do so, Alice leads a double life: an Oxford university student by day, a mad girl in an asylum by night.
The line between sanity and insanity thins when she meets Jack Diamonds, an arrogant college student who believes that nonsense is an actual science.”

Insanity is yet another book that I read without realizing that it was horror, but it didn’t come as much as a shock as Wink did. And I have to say, that I enjoyed Insanity a lot more because of the psychological aspects that mixed with mystery.

Everyone here is mad. Here being the Radcliffe Lunatic Asylum. Alice Wonder’s home for quite a while. And I love it. The actual insanity throughout the entire book was just delicious. It wasn’t making a mockery of actual asylum patients (in my limited opinion), but really delivered it well. I was genuinely captivated as I traveled through the looking glass.

Alice Wonder is, to say the absolute least, a fascinating character. She has doubts, hallucinations, inquiries, and is often confused with just trying to keep up with the changing events, but she has incredible wit. I enjoyed watching her pick up clues and solve riddles and puzzles. As the reader, I had just as many questions, if not more, than she did and it would have been simple mad to not continue the book until I received an answer for them all. Alice undergoes some character development, but for the sake of spoilers, I won’t say too much besides that it was realistically gradual, but also obvious. I never found myself saying Grow up, Alice! or Oh, come on! with her. I liked her as a character and Jace wrote her well.

The other characters were just as intriguing and I liked reading about them. Although, I somewhat hated one, they weren’t any less interesting. The plot was flawless and coupled with enchanting phrases like, “As if I am stained with his soul.” that kept the story alive throughout Alice’s journey. There are also comments about politics that were woven into the story without too much of a fuss and I noted that as I read.

The only reason why I gave Insanity a 4/5 and not a full five stars is because of the blatant disrespect Jace has towards Jesus Christ/God/Christianity. I’m not naive enough to believe that everyone believes in Him, but I think that whether you do or don’t, at the very least, you should be able to respect other people’s religious figures. There were comments like, “I guess Lewis couldn’t compete with God, although they are both big on nonsense.” and during a meeting a character asks “I wonder if Jesus Christ got that kind of attention.” I found this to be offensive, unnecessary, and distasteful. The novel had successfully captured and then kept my attention, but the addition of disrespectful dialogue removed some of my enthusiasm to continue reading.
Would I Recommend Insanity? If you’re into horror/thrillers, love a good mystery, and aren’t (too) offended by the disregard of what may be your respect religious figure, then I would recommend it. I do find it to be worth ninety-nine cents and I did find it enjoyable despite my usual avoidance of horror and thrillers.