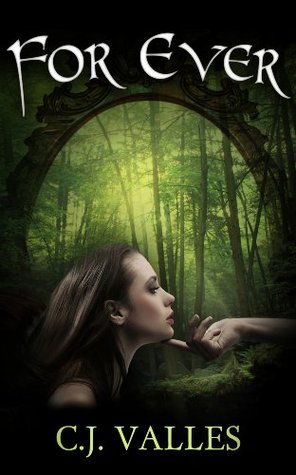 “For Ever starts now

A faded memory, something I saw behind Ever Casey’s eyes, begins to claw its way to the surface, and fuzzy impressions from my second day at Springview High School make the skin on my arms crawl. My limbs grow cold with fear. Whatever I saw in his mind was indistinct, but unmistakably sinister.
It hadn’t been nothing behind Ever Casey’s eyes. It had been something evil. Something he didn’t want me to see.
***
Sixteen-year-old Wren Sullivan doesn’t want to know what other people are thinking about her—because most of the time it sucks. Too bad since that’s what happens every time she looks into someone’s eyes.
When she moves to Portland, Oregon, after her parents’ divorce, she finally encounters someone whose thoughts are off limits. Looking into Ever Casey’s eyes, she finds … nothing. Or is there something he doesn’t want her to see there that will put her and anyone near her in danger?”

When I saw the title and the cover of For Ever, I was scared that I would end up reading the book and finding out that it would be a disappointing story of two teens promising each other forever. I am so thankful that I was wrong.

Even though Wren is the main character, I need to talk about Ever first. Ever Casey is a mysterious male character written in the proper way. Valle omitted the stereotypical scenes of the male love interest treating the main female character with deplorable manners. Instead of the usual Young Adult genre plot that consists of the male yelling, “STAY AWAY FROM ME. DON’T YOU GET IT? I’M BAD FOR YOU. I WILL HURT YOU.” (which is actually terrifying and I have to say, I would stay away) until he just “can’t stay away anymore” because he “loves” her, and all is suddenly forgiven, Valle has Ever chooses an effectively mysterious path: He ignores her. I refuse to give away too much information, but Ever is a wonderful male main character. I could appreciate him in how he treats Wren, the way he treats the people that are associated with her, his (normal) levels of protection over certain people, and so on. His vast knowledge of the world and life and humanity, yet his almost innocent curiosity with Wren is, dare I say it, sexy. It may be too far to say that Ever is one of my favorite male main characters, but it is quite possible.

Wren is awesome and I loved her. She was a realistic young woman who had a lot to deal with. The attractiveness of Ever was mentioned a couple of times, but I never doubted for a second that Wren wasn’t concentrating on the important things. Wren wasn’t afraid to stomp on her fear for a little bit and ask the tough and/or confusing questions. Yes, Wren found Ever to be handsome, but she wasn’t always swooning. She was concerned on more important matters than how Ever, or other boys, make her feel and I loved that. She was truly explored into the depths of her being. I have the upmost respect for her as a character and Valle for writing her to be like that. Wren isn’t quite a heroine yet, but I can easily see her becoming one. She wasn’t self-centered or always bemoaning how her life was turning out, but took issues head-on, even when the outcome was uncertain.

I liked that Wren had insecurities too.  It’s another topic that has a balance that is hard to find. You can end up writing a character who has no flaws, one that only thinks and whines about their flaws, or find the middle ground. Valle created Wren to be a strong main character who had insecurities and she did well. Wren was the perfect character.. She wasn’t constantly judging her looks or anything, but had natural and realistic insecurities. I appreciated the accurate representation of a young woman with insecurities and I find that other people reading could relate to her.

The plot is a great and exhilarating read. I had had to pause near the end in order to complete some tasks, but I was eager to finish it. I did feel that the ending was a little abrupt, but considering how much I enjoyed the rest of the book, I didn’t mind too much.

Would I Recommend For Ever? Yes, most definitely. It was an amazing book with gorgeous descriptions and I didn’t find any mistakes as I read it. I almost didn’t want to write a review, as if it would destroy the sacredness of the novel, but I needed tell you all of this literary gem I have found.