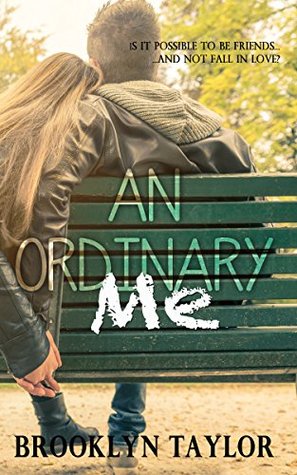 “From the outside looking in Garrison Davis seems like every other senior in high school. On the inside though, he’s an emotional wreck promising to not love anyone. He chooses to protect himself by vowing solitude. His dad is in prison for dealing drugs; his mother is a recovering addict and an emotional mess. The only thing that brings him joy is playing the drums and that feeling of being needed by his band. It is his escape, his passion. No one gets hurt or disappointed. That is until he lays his eyes on Reese at school. She is the exact example of what he cannot let himself get involved in. He would do nothing but drag her down with him.

“I want to tell her and show her how much I love her. I had loved her from the first time I saw her smile but I can’t, I won’t. She deserves so much more than I can offer. I’m the spawn of a drug dealer and an addict. I have never let myself love another person and now… I love her so much it hurts.”

Reese Owens is the exact opposite of Garrison. Inside she’s beaming; growing up in a happy home and on the outside she was a duck out of water. Her parents are the over protective set but are finally loosening the jail bars. Sophomore year in high school, she has never dated a boy and is envious of the social life her best friend Autumn Welch has. She meets Garrison and is instantly attracted to him. He pulls away when she pushes in. A whole new world opens up to Reese and she finds herself falling into situations she can’t get herself out of. Making bad decision after bad decision, she finds out the hard way on how life is full of choices. The one thing she wants more than anything is Garrison’s attention which she doesn’t get in return.

“How is it possible to love someone and keep it quiet? Never to utter those very words knowing he doesn’t feel the same way. I finally fall in love and he only wants to be friends. He is everything I have always wanted and he keeps me at a distance making sure we don’t get too close. How can I ignore my feelings and act like I don’t have them when we are around each other? How do I resist the urge to move my lips towards his when he is talking to me?”

Garrison realizes he has to be honest with Reese and tell her how he really feels before he loses her for good. Just maybe, he will get love in return for the first time in his life. When he finally convinces himself to come forth, a life changing event occurs that could take away the only person in his life that truly loves him.

Is it too late? Does he get the chance to tell her? And when he confesses does it matter?”

I read this synopsis a few days ago and I was really excited to read the book. The only issue was that it wasn’t free. So, I formally congratulate you, Brooklyn Taylor, your book was the first one, I, Paige Turner have ever bought to read and review.

I have to admit that I was disappointed as I got farther into the story. I was hoping for a novel that went more in-depth with the characters and, specifically, how Garrison Davis felt about his life. The synopsis promised me an engaging story where I could dive into Garrison’s mind and see just how much he wanted to break free of the trend his parents had begun to set. I wish it had entirely come through, but it wasn’t a bad experience.

Garrison is pretty cool. His name is cool and his character had potential to be cool(er). I could easily see some of his positive qualities and he seemed like a sincerely sweet kid with genuine intentions. I felt that while it may have been Taylor’s intention to make him appear conflicted with his emotions (which he was), from what I read, Garrison seemed to be repeating the same thoughts with different variations. I know this happen in ‘real life,’ but I needed some variety with what he had to say in order for me to completely understand his character. Besides that, however, I was rather pleased with Garrison as a character. As I said, he sounded like a sweet kid that wanted to be the difference he couldn’t see in his own life.

Reese Owens is a cool cat too. I don’t know if I agree that she’s the “exact opposite” of Garrison, but she definitely comes from a better home. And that’s okay. It was cute to watch her sprinkle joy into Garrison’s life by being herself and going out of her way to talk to him. Some of the things she did, I thought to be a bit out of character, but I was delighted to see how firm she was in not letting peer pressure ruin her. She is pressured by her peers a couple of times and she gives in once, but after that she stayed strong. It was a great message and it was refreshing to see an author who didn’t let the teenagers in her story constantly do whatever the crowd was doing, only to regret it later. If there was something I intensely appreciated, about Reese and from Taylor, it was that although Autumn was rather “out there” when it came to boys, there was no judgement from Reese to be found. When Reese thought about her and introduced her to the reader, there were no snide thoughts about how active she was and as the story progressed, there was a delicious lack of sneaky jokes about Autumn’s actions at her expense. Even though Reese and Autumn didn’t always see eye to eye, since Reese held back when it came to taking things farther physically with boys and Autumn felt less hesitation, there were no hurtful comments from Reese towards Autumn.

The plot was good for the point/message of the story and I don’t have many complaints. I saw the “plot twist” coming, partly because of the prologue and partly because of my own intuition. I thought it was rather weird that there were two epilogues, but neither of those are complaints, just an observations. The writing style wasn’t one of my favorites, even though Garrison is about eighteen and Reese is around fifteen, senior and sophomore respectively, they spoke like middle-schoolers. In fact, all of the characters sounded like middle-schoolers in their texts and dialogue, which I also thought was odd, but it didn’t ruin the story for me or anything of the sort. There was also a few mistakes in the writing, that could have been edited in a brief proofread, but, as I said, it didn’t ruin the story for me.
Would I Recommend An Ordinary Me? If you’re looking to enjoy a simple, but sweet story about a girl and a guy falling in love and don’t mind a few cheesy moments and somewhat young-sounding teenagers for $1.99, then I say go for it.