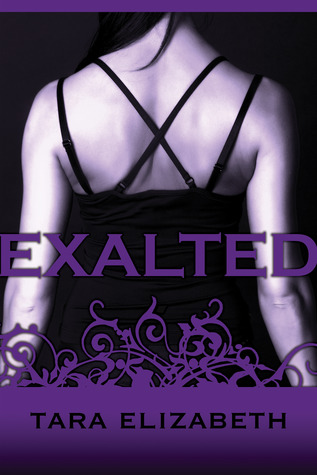 “After the fall of mankind, the Exalted became the protectors of the people. As an Exalted trainee, all Mena ever wanted was to be strong, to serve and to fearlessly protect the people of the United Republic of the Saved. All Exalted feel the same. In fact, that’s all they feel. Only when Ryker, an outsider, crashes into Mena’s life, does she learn that people are meant to feel much more.
In this bleak future, set in what’s left of the southern United States, the trainees must compete in three Trials to earn their position amongst the strongest Exalted. In these Trials, female is pitted against female and male against male in demonstrations of weaponry, fighting and survival skills. The outcome: the United Ceremony, pairing trainees together for life based on how they place. The ultimate hope is to breed stronger Exalted and even better protectors.
Upon learning from Ryker that the supplement she’s taken her entire life is actually an emotion-blocking drug, her path takes an unexpected shift. Without the veil of “The Pump” blocking her emotions, Mena struggles with competing in the Trials and with her new, confusing love life. She’s experiencing new feelings with not one but two different guys, will Mena choose to leave with Ryker and be free or stay with her childhood friend, Ethan, and be United?”

I honestly already knew that Exalted wasn’t going to be a book I would enjoy. After reading the synopsis, I was mildly curious, but after a chapter or two in, I knew the plot and guessed almost everything that was going to happen.

Mena doesn’t have it all that bad. Her life isn’t a bleak as it seems and compared to all of the other dystopian or post-apocalyptic novels I have read, Mena has the easiest life of them all. Can you imagine living without ever feeling love? Never laughing, smiling, feeling fear, blushing, or feeling infatuation? Mena’s life consists of never feeling infatuation/love, fear, and some other emotions. That is the type of life she and the other Exalteds are familiar with.
Although she can still feel pride, anger, and embarrassment/shame, Mena enjoys her somewhat lack of emotions. As someone who knows what infatuation and such things as that feels like, never having felt love seems like a horrible fate. So excuse me when I say that while I can’t ever imagine not having dreams of the future or the occasional butterfly in my stomach, I don’t know if her situation is as angry-mob worthy as it seems. The “Pump” as it is (clichely) called, does exactly what everyone is promised it will do: make you stronger. By taking the Pump, the Exalteds don’t fear, have a common goal in mind, don’t have any risk of getting pregnant (there is no lust among them, or attraction in general), no one is distracted by looks, and the overall general teenage hormonal confusion and identity crises are gone. The Exalteds are mentally and emotionally stronger, but they are only physically stronger because they’re solely focused on building physical strength. Now, by no means do I condone taking away such emotions someone without their consent, but I am trying to see the situation, given the circumstances, from both my perspective and Mena’s.

Mena’s name means “strength and knowledge,” but I wasn’t impressed with her as a heroine. I suppose that there couldn’t be too much character development because she goes from what is supposed to be an unfeeling loyal worker for the government to a blushing girl who is suddenly infatuated with two different guys and feels fear. Nonetheless, she doesn’t do anything very heroine-like. All she does is stop taking the pump, not report an ‘outsider’ (rogue), and try not to laugh or smile. Mena does one thing that would land her on my heroine list. It’s the only dialogue that I appreciated and remembered in the entire book: “I have decided that whatever my choice, it will not be about a boy. It will be about what’s best for me…” So many heroines make their choices based on the one (or often, two) male love interest in their lives. Even though Mena isn’t very noteworthy, her stance on not allowing major decisions be impacted by love/lust is admirable and heroine-like.

There were some odd things included in the story and some things that didn’t match up. From the synopsis, the Exalted don’t feel any emotions, but that isn’t entirely true. Exalteds feel anger, shame or the embarrassment, pride, and other emotions throughout the story. In another part, Mena says there is “no such thing as modesty” in the entire area that these people live. Why wouldn’t there be? There also is apparently no need for math, science, or history once the Exalted child turns 17. It’s more understandable why, since the first step to brainwashing people is taking away the opportunity to learn, but it seemed odd why they would stop learning at 17.

The plot progressed so slowly. By the time I reached anything significant, I had legitimately forgotten Mena’s name and had to scroll back to remind myself who she was. It wasn’t drawn out because a character needed developing or there was a lot of information that Elizabeth needed to give to the reader before the book ended, it was just slow. I understand that Mena is learning all of the new emotions that she has missed out on, I truly get that. But I already experience these emotions and I would like to get to some action before the book is over. The plot wasn’t anything worth reading. The entire plot was Mena figuring out her emotions and going through the trials.Was it a poorly used method to get readers to buy another book? Quite possible. But if that is your scheme, your first book has to be “Wow! Dude, you need to check this book out.” and not “Hey dude, you want to go to the bookstore? I want to take this book back.”

I admit that I wanted to hate Exalted after I read the synopsis. It sounded like yet another cliche novel, where the main character immediately starts an uproar and total rebellion while two men beg for her attention. Since Exalted didn’t turn out this way, I have to appreciate that, even though I didn’t find it thrilling.