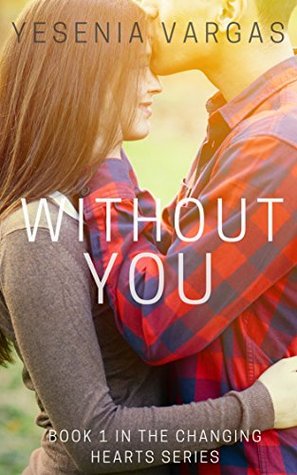 “It’s the senior year of high school. Ariana has a second chance at love, and this time, with a much better guy, Lucas.
She also sends off her application to her dream college knowing Lucas can’t afford to go anywhere but the community college in their hometown. If she can get in and afford to go herself (and that’s a big if), Ariana will have a tough choice to make.
Attending community college with Lucas or leaving him and everyone else behind to head off to the University of Georgia.
Which regret will she choose? Not going to the school of her dreams or possibly ruining her relationship with the guy of her dreams? Meanwhile, Ariana’s brother, Jimmy, and best friend, Mayra, contemplate the idea of giving each other a chance.”

If I have to read the word ‘groan’ one more time, I may scream. I’m disappointed in Without You. I had no expectations for it after reading the synopsis and seeing the cover, that is to say, I wanted to see what Vargas had to offer. Vargas unfortunately didn’t offer much. I guessed the plot once I had reached the one-third mark in the story and from there I lost interest. Even the title, “Without You,” didn’t seem to tie in with the story.

I don’t quite know how I feel about Ariana because there were parts of her missing. All I knew about her, for sure, was that she wanted to go to University of Georgia, she had some kind of terrible experience with a mystery guy named Carlos, she speaks Spanish, is rather selfish, she curses when it’s not necessary, makes poor decisions, allows herself to be pressured into things, and she’s rather okay with lying to her parents and keeping serious secrets from them. I’m not sure about her hair color, eye color, her personality, why she’s the main character, or any of the basic things that make up a character. Ariana needed to be developed into a more interesting and wholesome character before she would have resembled a teenager in my perspective.

The other characters were in the same situation. I didn’t know their personalities, their interests, what they looked like, and they all (except for one!) freely lie to their parents. None of these teens are role models.

I am completely confused by this plot. There doesn’t seem to be one. There was always some type of conflict in a story, but never one that had me thinking, “Now this is the main issue.” I don’t recall ever reading a book where there wasn’t a conflict in some form, except maybe Without You. There were minor conflicts, like the sudden appearance of Wendy (a plot-pushing character) who was forgotten after a few pages, the love interest’s family issues (the issues were major, but treated as if they were minor until it was convenient), and Carlos who I will talk about in a few. None of these small issues added up or became the main conflict. Eventually, every problem just died away or were fixed quickly and quietly and that was that. One of the issues that I had with Without You is how Mayra pressured Ariana into making decisions that Mayra thought was best and not Ariana. I found myself asking, “What does Ariana want though? Does she really want to take this step or is she just following Mayra’s advice?” When the love interest is introduced, Mayra immediately insists that Ariana should try to date him, ignoring the fact that they’ve barely even said so much as “Hi.” Then, despite Ariana’s resistance, lies to the love interest in order to get Ariana the love interest’s number. Once Ariana and the love interest start dating, Mayra decides that it’s time to start telling Ariana that she needs to have sex with him ASAP. I don’t know how Ariana felt, but I felt uncomfortable. The relationship progressed too quickly to be healthy and though Mayra wasn’t the only one to blame, I believe she is the main reason why things happened the way they did.

Another issue was the vague hints toward what happened “last year” with Carlos. I never found out who Carlos was, what he did, what happened, and why Ariana was so traumatized about it. Even the love interest knew what happened, but I was left out of the loop. Maybe it’s explained in the sequel, but it’s just not proper to hint at it throughout the book, as if the reader is going to learn more about it later on in the book, and then never explain it.

It was cool to read about a Hispanic main character and her family and friends, but I would have appreciated if her Hispanic background was focused on more than just a few sentences of Spanish and some courses in high-school. I think that with some major improvements, Without You/Unending Love could be great.