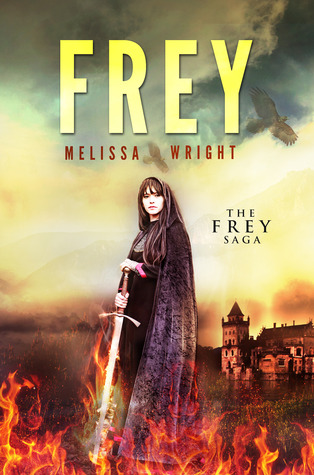 “Unaware she’s been bound from using magic, Frey leads a small, miserable life in the village where she’s sent after the death of her mother. But a tiny spark starts a fury of changes and she finds herself running from everything she’s ever known.
Hunted by council for practicing dark magic, she is certain she’s been wrongfully accused. She flees, and is forced to rely on strangers for protection. But the farther she strays from home, the more her magic and forgotten memories return and she begins to suspect all is not as it seems.”

Firstly, I was drawn to this book by the cover. Frey, who I assumed was the girl behind the flames, looked powerful, mysterious, and emotionally strong. The hawk that lurked behind the smoke only seemed to heighten my expectations. The hawk seemed to be a hint, meant to lead me to believe that Frey’s powers reached beyond expectations. Dare I say it, that her powers soared. The hawk didn’t mislead me either.

Frey was powerful. She had yet to reach her full potential, which I understand, Frey is just the first book. Frey is learning herself and the ways of magic and I, as the reader learned alongside her. I assumed that Frey is around sixteen or seventeen, but I don’t recall it ever being mentioned inside the actual book or synopsis. Granted, the book does fall under the Young Adult category, so I believe that her being around the young adult age group is a safe assumption. As I said, Frey was powerful. I loved reading about her small adventures while she tested out her magic. They were interesting and I wish she had fully embraced the magical elf in her much more quickly than she did. Sadly, Frey had no emotional strength.

She was either sobbing or getting knocked out because she couldn’t handle the news she just learned. Before all of that, Frey’s home-life was somewhat a mess. The type of messy home-life that, had it been developed enough, should have hardened Frey’s heart at least just a tiny bit. I’m all for crying, it’s necessary to cry and highly unhealthy to bottle up your emotions, but Frey should have had better control over the waterworks. I felt second-hand embarrassment with some of her actions; the jumping to conclusions, the way she handled situations, how she talked to certain elves, and the dramatic falling onto the ground and sobbing events. She allowed herself to be led along like a pet, accepted what people told her without bothering to try to fact check or question anything, wasn’t bothered by the secrets that were whispered on the wind by the people she had entrusted with her life, and was completely naive about everything. At one point, she finds out that her mother may have done something terrible and she immediately jumps to the conclusion that another character despises her. There was no evidence that her assumption was true and I feel that even Frey knew this. Her attempts at convincing herself that the character hated her were pathetic. She said it about three times and then it was forgotten. That doesn’t go to say that I wanted her to feel like the character hated her, but it was an unnecessary attempt at creating conflict. I was completed embarrassed for her and her emotional antics did not match the strength she possessed in magic.

I didn’t understand the romance in this book. I was completely lost. One minute the love interest (thankfully it was not a love triangle) (yet, it was being developed) was raising Frey’s head to meet his or they were ‘just about’ to have some special moment or Frey was ‘just about’ to kiss him and then the moment would just die. I don’t mean the type of ‘die’ where another character interrupts, though that did happen, I mean the type of die where you’re thinking, Well…um. Where did this come from? How would this ever be classified as a moment? I don’t see their chemistry. There was no chemistry between the love interest and Frey. Surprisingly, the romance didn’t feel forced, but it was unneeded. Not to mention that I’m not sure how old anyone in this book is, but the love interest seems to be much older than Frey. I don’t mean a thirty year difference, but the way he carries himself, his dialogue, and wisdom just makes me feel that he’s a bit too old for Frey, who is supposedly seventeen years old.

The writing was good, rather descriptive and enjoyable, but not enthralling. There were no grammatical or spelling errors that I could see, so I was at least not yanked out of the word that Wright had created. However, Frey wasn’t a ‘I-just-missed-my-bus-stop’ type of book, but more like a “When-is-my-bus-stop-coming?’ type of book. Despite how descriptive Wright’s writing is–I simply adored the names she gave the elves–she still lacked a plot or ultimate focus. By the time I reached the end of Frey, I was confused, to the point where I said, “Wait, what?” out loud. I didn’t understand the ending, which was horribly anti-climactic and didn’t make sense. The focus switched from Frey current life, to bits of pieces of her past, to another character’s past, to Frey’s mother’s past, to Frey’s mother’s sister’s past (I could have just said aunt, but where’s the fun in that?), to Frey’s ability in magic, to Frey’s lost of ability in magic, and it just never ended. Between Frey constantly being put to sleep and what little you truly know about anything because everything has been mentioned at least once but nothing is completely explained (besides Frey’s mother) you’re left at the end of the book as dazed and confused as Frey is when she gains consciousness.

All things considered, I gave Frey three-out-of-five star rating. Frey is interesting and so is Frey. It’s an entertaining read that I would recommend if you’re bored and ignoring your responsibilities. I can tell that Wright put genuine thought into her story; it’s obvious in how she wrote, the names she chose, and the way she connected everything. I just feel that even though she had all of the right ingredients, she just didn’t let the cake bake long enough and it came out under-cooked.