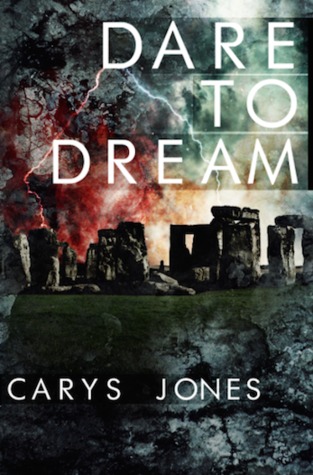 ““The world was going to end. Of that, Maggie Trafford was certain.”
Fourteen-year-old Maggie Trafford leads a normal life. Well, as normal as being crammed in a three-bedroom house with four siblings and a single parent can be, anyway. But despite being somewhat ignored at home, Maggie excels, earning top grades, a best friend who would do anything for her, and stolen looks from a boy in Maths.
It’s not until the dreams start that Maggie realizes “normal” is the least of her problems. Every night, she lives the same nightmare—red lightning, shattered glass, destruction. But nightmares are just that, right? No one believes her when she says it’s an omen. At least, not until the already mysterious pillars of Stonehenge start falling.
No longer alone in her fear, Maggie and the world watch with bated breath as one after another, the historic stones tumble, like a clock counting down. But only Maggie knows what it means: when the last stone falls, destruction will reign. And when the world ends, there’s only one option left—survive.
Horrifying and raw, Dare to Dream is equal parts tragedy and hope, detailing the aftermath of apocalyptic catastrophe, the quest for survival, and the importance of belief.”

Teenaged girl leading a “normal” life? Check. Apocalypse? Check. She’s the key to “it all”? Check. “I must survive!” mentality? Triple check.

“Horrifying and raw, Dare to Dream is equal parts tragedy and hope, detailing the aftermath of apocalyptic catastrophe, the quest for survival, and the importance of belief.” I read this (because it’s the synopsis) and I shrugged my shoulders and thought “Okay, this might be interesting.” Oh, how wrong I was. Dare to Dream wasn’t equal parts tragedy and hope, but a complete tragedy.

I need to talk about Maggie, but before that: This author dedicated this book to her father because “Maggie was always your favorite.” I am by no means making fun of the dedication, that is very sweet. I just had a little chuckle over the fact that Jones made her father’s favorite have an incredibly difficult time throughout the book. Dedication aside, Maggie was annoying.

I was in pain when I read Dare to Dream. It was a colossal waste of time and I’m horrified that it cost actual U.S. dollars to buy. I have to start with Maggie, the “heroine.” What standard was Jones following when she created Maggie? She was whiny, made ridiculous assumptions, and had the emotional capacity of a paperclip. She was barely a character, to the point where I don’t even have much to write about her. It’s the plot and writing that I had the most issue with because can you really criticize a paper clip for having no character?

The plot might have had a chance of being interesting. A fourteen year old girl whose dreams were letting her know that the end times were coming? Cool. A possibility that she can mend her family back together in the process? Sounds good. Some other kids that recognize the danger their world is in and band together with Maggie? Not so bad. Was that what this was? Yes to the first, no the second, and a yes to the third. Was it cool/good/great/any of the above? Not in the least.

Before anything else, can I just say that men hitting women is wrong? Can we all agree on that? Great. So why did Jones sit down at her computer and think to herself: “Hmm..I’m going to have Andy slap Dawn and condone his actions because she needs to toughen up. I like that and I know my readers will too.” These are fourteen year old children and this is a young adult novel, why would this be appropriate? As a friend said, “…you have to be careful how you present it because you don’t want to accidentally condone it.” Here is the scene:

“‘This is your nightmare!” Dawn shrugged Maggie off in one violent, swift movement, suddenly incensed. “I shouldn’t be here! You made this happen. You! This was all in your head–only you should be here! You brought this on me!”

“No, no, I didn’t,” Maggie pleaded, tears beginning to fall down her own cheeks.

“We are going to die! We are all going to die, and so what? There’s nothing left to live for!” Dawn was hysterical. Andy suddenly strode over with a determined look in his eye. He stood before Dawn, and then promptly slapped her straight across the face. She ceased to lament, shocked into silence, holding her now throbbing cheek.”

Andy then proceeds to raise Maggie on a pedestal and claim that Maggie saved the three of them from certain death. Dawn listens to his rant and then apologizes to Maggie, none of them having an issue with Andy slapping Dawn. Maggie never openly says that Andy was right in slapping her best friend, but silence is acceptance. She doesn’t mention once that what he did was wrong and therefore it is brushed over and forgotten. To add insult to injury, Jones has Dawn play it off as a joke saying that Andy “hits like a girl.” An insult to girls and a ridiculous way to pass off what Andy did as harmless. This is not an example of a boy taking charge of a situation, this is not an example of a boy being the strong one of the group and comforting the woman who is having a break down, this is an example of a boy who thinks that the correct response to a girl having a mental breakdown is slapping them. Whatever this scene is meant to be, it was written poorly and it should not have been written.

In addition to that, the plot was all over the place with abundant plot pushers. Many situations and characters were added and then never spoke of again. They weren’t worth the time it took to write about them and they weren’t worth the time it took me to read about them. A plot must have a great bone structure, a solid line of events that eventually brings everything to an end. Dare to Dream has the structure and solidity of jello. We first follow the “normal” life of Maggie where her alcoholic Mom will slap her  (why so much slapping in this book?) if Maggie crosses some type of line,  the next (spoiler) Maggie is finding her father without any issues (and then he is never mentioned again!), then we’re following the newscaster and her reports on the Stonehenge falling, next we learn about Andy, and it just bounced back and forth. There was no solid “We are following Maggie as she saves the world” plot line, the plot completely lacked structure. Not to mention that it dragged on and on. The first half of the book is talking about Maggie’s dream. The same dream. It is essentially this:

I have dreams that the world is ending. I wake up with cuts and bruises and blood on my body because of them. I tell people that my dreams mean that the end of the world is soon. The Stonehenge falling is a clock, when the last stone falls, the world will end. No one believes me except for my best friend and Andy.

That is repeated for half of the book. It was mind-numbing. The second half is:

We must keep walking and never get malnourished despite not once drinking water or having actual food besides these energy bars we have. Any cuts or bruises we get along the way will only be remembered when it is convenient. When we finally get to our destination, Jones slips in the cliche line “This is only the beginning.”

To make what would otherwise be a very long review short, I’ve included some scenes below for you to read yourself. Feel free to comment your thoughts on my review and/or how you feel about the quotes I added.

Is Dare to Dream worth five of your hard-earned dollars? I don’t think so.

Context: Maggie’s Mom just got her job application to a factory rejected.

“‘How much experience do you need to press a button on a expletive omitted factory line?” Angie Trafford had cried angrily to her eldest daughter as she sat down at the kitchen table. Her whole body sagged beneath her as she rested her chin in her hands and blinked back tears. “I mean, they take on anybody there, anybody. Even immigrants who aren’t legal and can’t speak English! Surely I’m better than a bloody immigrant!’”

Context: Maggie is leaving school with Andy and Dawn because of the dark ominous clouds that are approaching.

“‘I’d say go to hell, Miss Foley, but you’ll be there soon enough,’ Maggie said, her voice deadpan. Then she turned and left the classroom, feeling empowered.”

Context: Maggie, Andy, and Dawn are frustrated with each other, especially Dawn who has just eaten almost all their food. Andy is currently contemplating life.
“As Andy attempted to regain his composure, anger still spreading through him like a wild fire, he thought of when he had sat and studied the First World War during a history lesson. He had been fascinated by what the soldiers had had to face. They became harbingers of death, delivering it and living alongside it. They would witness their friends being blown apart and have to carry on, continue serving their country. Like most young men, Andy was grateful that the war was long over and that conscription was a thing of the past. But deep down, he wondered how it would feel, to test yourself to your most extreme limits like that.”