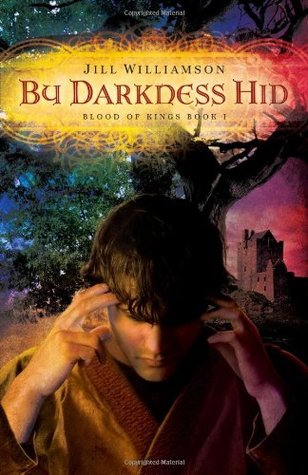 “Given the chance to train as a squire, kitchen servant Achan Cham hopes to pull himself out of his pitiful life and become a Kingsguard Knight. When Achan’s owner learns of his training, he forces Achan to spar with the Crown Prince–more of a death sentence than an honor. Meanwhile, strange voices in Achan’s head cause him to fear he’s going mad. While escorting the prince to a council presentation, their convoy is attacked. Achan is wounded and arrested, but escapes from prison–only to discover a secret about himself he never believed possible.”

While the cover of the book isn’t exactly exquisite, By Darkness Hid was a well written adventure in a new world.

The whole story was told in omnipotent third person as the story switched between Achan and Vrell, the two main characters, which was a wise choice on Williamson’s part. The point of view helps to move the plot along without unnecessary dialogue or scenes, since now the reader can see inside the two different characters’ heads. It’s going to be a little hard to write a good amount about Vrell and Achan since I don’t want to give away any spoilers, but we will see how it goes.

Achan Cham’s life broke my heart more than once. Each time it seemed that he could finally stand on top of the world, the earth would flip and he would be back on the bottom again. He was sweet, witty, strong in both mind and body, caring, hopeful, down to earth, and an amazing character. I loved that he had such a humble personality, but wasn’t afraid to talk back to people who were out of line, even if they were authority. He was an admirable man who did his best to handle the abuse that was thrown at him.

Vrell was quite the character. I actually cannot say much about Vrell because most of it would actually be a spoiler. Just know that Vrell was an excellent character that I sincerely enjoyed reading about. Although, sometimes I would forget Vrell’s age which made things a bit difficult, since Vrell didn’t always think like someone Vrell’s age usually would. Vrell was a character that was developed well and had some courage, spunk, ingenuity, and wit.

The plot was great, in all honesty. I was hooked for the most part, there were some parts where I wasn’t too thrilled, but it was very entertaining. Each character that was introduced was either a subtle plot-pusher (which is sometimes acceptable) or a necessary character. There were many plot twists, the biggest one, I won’t lie, I did see it coming. It was very obvious at a certain point, but still very suspenseful. It only made me love Achan even more.

The ending was stale, unfortunately. A poorly done cliffhanger that did not make me want to read more. Based on what I read in the first book, I would expect the second book to be almost as good. I don’t want to just expect or hope though. When I get to the end of a book and it’s supposed to be a cliffhanger, I want to be suddenly dangling off a cliff and I need to be frightened. I need to be horrified that I will never know what happens next if I don’t buy the sequel. Will my fingers slip? Will a bird will peck my eyes out and I fall? Will I get smacked in the head by a flying stingray? This is a very general, possibly over-exaggerated, example of what I should have running through my mind. If I reach the cliffhanger and I’m still looking off the cliff, rather than hanging from it, the writer has let me down.

Besides that, the writing was excellent. I loved the world building, no clichés, but not completely original. The writing style still made it feel unique which is exactly what matters.

I did notice that it was placed under the “Christian Fiction” tag, which I believe may throw people off a bit. It wasn’t an “in-your-face” type of book, but there were times where a character would say something similar to: “all of these other gods are false, this one is the only right one.” Or there would be a quote from the Bible said to Achan. I would recommend it for a Christian and a non-Christian. There were Christian themes, but it wasn’t overpowering or preachy.